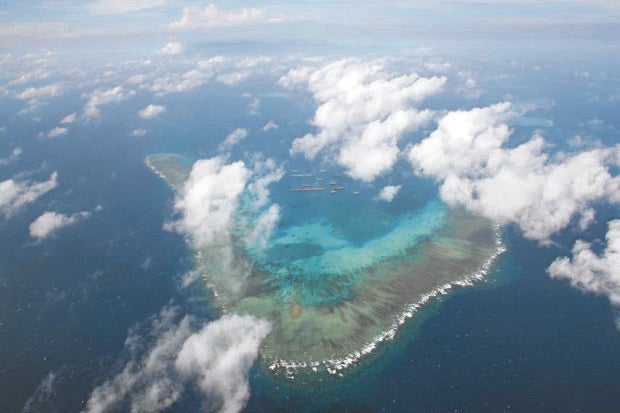 A break in the clouds on Monday, March 22, 2021, shows some of the more than 200 Chinese vessels supposedly seeking shelter, according to the Chinese Embassy, at Julian Felipe (Whitsun) Reef in the West Philippine Sea. But the Philippine government and the US Embassy separately say these are Chinese maritime militia vessels and that the weather is fine. —CONTRIBUTED PHOTO

MANILA, Philippines — In light of continuing dispute in the West Philippine Sea amid the ongoing presence of Chinese vessels there, the Philippine National Police (PNP) said Monday that it will be needing bigger boats to expand its area of patrol along the country’s coasts.

“As of the moment, we have these smaller boats that are capable of patrolling up to the contiguous zone only, and that is 24 nautical miles from the archipelagic baselines. So hanggang doon lang po kami sa ngayon (we can only patrol up to that area only) because we have no bigger boats,” Jamili noted.

“That is why we have this wishlist to have bigger ships and also kung tutulong ‘yung PNP Maritime Group kung kinakailangan (if the PNP Maritime will help if needed), yes we are very willing to help in this endeavor,” he added, referring to the efforts of the Armed Forces of the Philippines (AFP) to protect islands and reefs or features in the West Philippine Sea.

Jamili said they are regularly conducting coastal patrol along the Ilocos, Central Luzon, and Mimaropa Regions, which are facing the disputed waters.

He also said they will deploy a unit at Pagasa Island to support the government forces currently posted there.

For his part, PNP chief Debold Sinas pledged the unwavering support of the national police force to AFP and the Philippine Navy.

(We will help in the intelligence gathering within the coastal area. We will monitor forces entering our territory and all of us will support the AFP in their duty to protect our islands in the disputed waters.)

On April 14, the NTF-WPS reported that around 240 Chinese militia vessels remain moored within the Philippines’ territorial waters.

The Philippines has since then filed a string of diplomatic protests over the continued presence of the Chinese vessels near the Julian Felipe (Whitsun) Reef.

De Lima: Rehabilitate AFP or be a ‘satellite’ to China