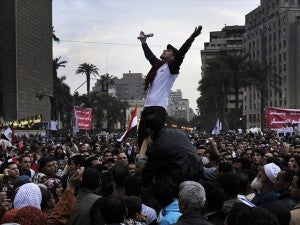 Egyptians protest against the country's ruling military council during a demonstration in Tahrir Square in Cairo, Egypt, Sunday, Nov. 27, 2011. Egypt's military ruler warned of "extremely grave" consequences if the turbulent nation does not pull through its current crisis and urged voters to turn out for landmark parliamentary elections starting Monday. (AP Photo/Bela Szandelszky)

So far, no Filipinos have been hurt in the mass protests in Cairo and other parts of Egypt demanding an immediate end to army rule in the troubled nation.

This bit of positive news coming from the Middle East country was relayed to the Philippine Daily Inquirer on Sunday by spokesperson Raul Hernandez of the Department of Foreign Affairs (DFA).

“As of today (November 27), there were no Filipino casualties reported (to the Philippine Embassy in the Egyptian capital),” said Hernandez.

The embassy was “actively monitoring the situation in that country,” he added.

“Our embassy has also advised Filipinos there, through the Filipino community network, to be cautious and vigilant and not to participate in political activities. They were also advised to avoid areas of mass protests and unrest,” Hernandez said.

The foreign office assured the public it was closely monitoring developments in Egypt and that “an alert level has not been declared.”

The DFA saw no need to move or repatriate Philippine nationals at this time.

There are more than 6,500 Filipinos in Egypt—mostly in Cairo and Alexandria—including professionals and 1,674 university students.

Late in January, the DFA set aside a P25-million emergency fund for the mass evacuation of Filipinos from Egypt, which did not push after then-President Hosni Mubarak decided to step down in early February.

The DFA has issued a travel advisory asking Filipino tourists to defer nonessential travel to Egypt until the security situation there stabilizes.

On Friday, Egyptian activists called for fresh mass protests in Cairo to demand an immediate end to army rule, even as the military vowed to prevent the unrest from disrupting the elections this week, said an Agence France-Presse (AFP) report.

The call for new protests in Cairo’s Tahrir Square came despite an apology by the military rulers for the police killings.

The Tahrir Square protest was countered by a rival demonstration in a square about three kilometers away, where more than 10,000 people gathered to show support for the military, AFP added.