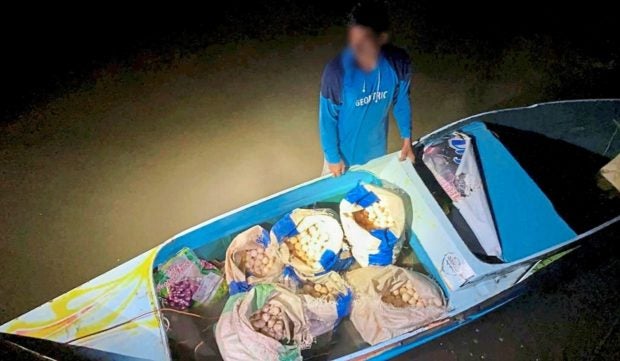 Caught red-handed: The suspect is seen with sacks of turtle eggs in the waters off Sandakan. The Star/Asia News Network

KOTA KINABALU — Some 3,000 eggs of endangered turtles were seized by a police border patrol from a boatman who was trying to slip into Sandakan waters on Sabah’s east coast.

Sandakan General Operations Force (GOF) Battalion 15 commander Supt Toipi Lamat said the 31-year-old suspect was arrested after his boat was intercepted in the waters off Nunuyan Darat at about 8:30 pm on Saturday.

He said they believed the suspect tried to slip in during the period for terawih prayers as he thought security forces would not be out on patrol.

He added that a GOF Tiger Platoon team led by Insp Mohammad Halil Husairy Hussain was on patrol under Ops Benteng in the area when they spotted a fast-moving pump boat heading towards Kampung Nunuyan Darat.

The boatman sped off but the team managed to intercept the boat after a brief chase, said Supt Toipi.

He added that the suspect was not able to provide any identity document and they believed he was coming in from southern Philippines.

On inspecting the boat, the GOF team found six sacks filled with turtle eggs. Each sack had about 500 such eggs.

“The suspect was seen throwing some objects into the sea, which we believe were more eggs, ” said Supt Toipi.

Investigations indicate the suspect was smuggling the turtle eggs from Taganak Island in southern Philippines and was headed for the Sandakan market.

Police will hand over the investigation to the Wildlife Department for further action while the suspect will be referred to the Immigration Department.