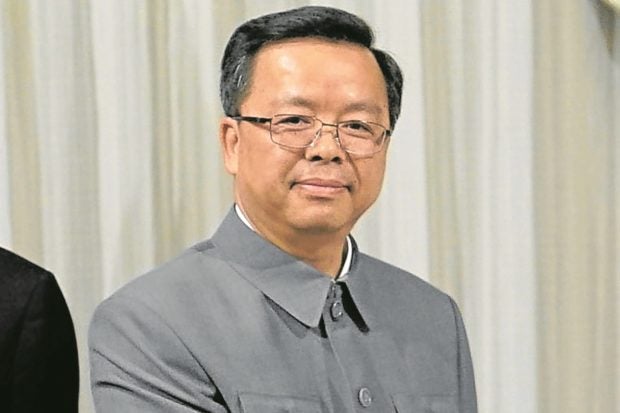 MANILA, Philippines — China has put the Philippines in a bind by sending a swarm of its maritime militia vessels to a reef in the West Philippine Sea where Manila would play into the hands of Beijing if it takes no action against the incursion or be portrayed as escalating tension between the two countries if it does, maritime and security experts said on Tuesday.

The massive deployment of over 200 Chinese vessels at the Julian Felipe (Whitsun) Reef last month could also close the gap between two of China’s artificial islands within the Philippines’ exclusive economic zone (EEZ) and pressure the Philippines to choose to ally itself with China or the United States, they said.

If there is “inaction” to the swarm, “in Beijing’s point of view that’s basically getting a victory out of it because there’s no response from the victim,” said Collin Koh, research fellow at S. Rajaratnam School of International Studies in Singapore.

“The other course of action could be to precipitate an action by the victim that can potentially be seen as escalation,” he said during an online forum organized by the Foreign Correspondents Association of the Philippines (Focap).

Manila, however, had taken action, albeit nonmilitary, filing a formal diplomatic protest against the presence of the Chinese vessels and demanding their withdrawal.

On Tuesday, the Department of Foreign Affairs (DFA) said it summoned China’s ambassador, Huang Xilian, to express “displeasure over the illegal lingering presence” of the Chinese vessels at Julian Felipe.

“The continuing presence of Chinese vessels around the reef is a source of regional tension,” the DFA said in a statement after the meeting between Huang and acting Foreign Undersecretary Elizabeth Buensuceso.

Koh said that the massing of Chinese ships at Julian Felipe “potentially could mean the attempt by China to try to create a fait accompli that will likely push the victim, in this case the Philippines, to a few limited courses of action.”

“In a sense, it might potentially be similar as a repeat of what happened in Mischief Reef back in the 1990s,” he pointed out, referring to the Philippines’ Panganiban Reef where China built structures on stilts, supposedly as shelter for fishermen in 1994-1995.

China ignored the country’s protests against the construction and land reclamation, which grew over the years to become the biggest of seven artificial islands built by China in the South China Sea.

In his own statement against the presence of the Chinese vessels, Defense Secretary Delfin Lorenzana had said that China’s latest moves showed its “intent to further occupy” other maritime features in the West Philippine Sea, waters within the Philippines’ 370-kilometer EEZ.

Koh pointed out that controlling Julian Felipe had the “strategic value” for China of “closing the gap between its two established island outposts in the Spratlys”—apparently referring to Panganiban and McKennan (Hughes) Reefs.

According to security expert Carlyle Thayer, the military balance in the Indo-Pacific Region, which includes the South China Sea, is “becoming more unfavorable” to the United States, the Philippines’ only defense treaty ally.

Thayer, an emeritus professor of the University of New South Wales, Canberra, at the Australian Defence Force Academy, said that such a situation “raises the risk that China will become emboldened to alter the status quo.”

Speaking at the Focap forum, Thayer said the presence of the Chinese vessels at Julian Felipe was “designed to put pressure on President Duterte to equivocate whether or not he is going to terminate the VFA (Visiting Forces Agreement with the United States).”

Such a move by Beijing was also intended to “disrupt any possibility of getting the US alliance with the Philippines reinvigorated and demonstrate that the US has no strategy that would alter the status quo.”

He called the international security strategy of US President Joe Biden’s administration toward China as an “action-reaction cycle.”

Thayer said that strategy would lead to “more frequent sea and air encounters with China and regional states of allies and partners” like the Philippines and they will come “under increased US and Chinese pressure to take sides as these tensions heighten.”

Sen. Risa Hontiveros said the Philippine government must rethink its current “alliances and allegiances” which tolerated and emboldened China to push its claims in the West Philippine Sea.

“China is becoming the region’s biggest bully,” Hontiveros said at the same forum. “China is the bully pretending to be your best friend—and bullies feed off weakness and insecurity. It’s time to say enough is enough. There is another way.”

She called on the military and the Coast Guard to “provide a protective umbrella” for the country’s fishermen.

“We cannot allow ourselves to be kicked out of our own backyard. The West Philippine Sea is part of the patrimony of the Filipino people,” Hontiveros said.

In her meeting with Ambassador Huang, Buensuceso asserted that Julian Felipe was inside the Philippines’ EEZ as affirmed by the 2016 ruling of the international arbitral tribunal that recognized the country’s sovereignty and sovereign rights in the West Philippine Sea.

Ivy Banzon-Abalos, the executive director of the DFA’s strategic communications office, said both sides “agreed to lower the tensions and handle the issue diplomatically.”

“(But) we have yet to see (the) complete removal of (the Chinese) ships,” she said.

In a tweet, Foreign Secretary Teodoro Locsin Jr. on Tuesday said he was informed that only nine Chinese vessels remained at Julian Felipe.

“Come, come, time to go. As I said, while it may well be traditional fishing grounds, tradition yields to law and the law on the matter is Unclos (United Nations Convention on the Law of the Sea) and the arbitral award and the common rules of statutory construction,” he said.

—WITH REPORTS FROM MELVIN GASON AND MARLON RAMOS