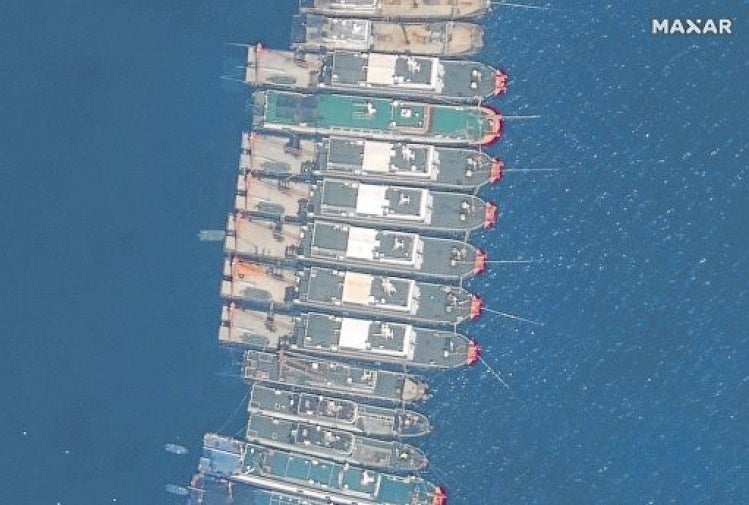 MANILA, Philippines — Defense Secretary Delfin Lorenzana has earned support from some senators who, on Monday, called for an end to China’s continued invasion in the West Philippine Sea.

In separate statements, the legislators lauded Lorenzana’s demand for the Chinese to withdraw their ships from the Julian Felipe Reef.

According to Senate Minority Leader Franklin Drilon, what Beijing has been doing in the disputed sea is “by all accounts…maritime bullying.”

The veteran lawmaker also said that aside from taking a strong position against the presence of the Chinese vessels at the Julian Felipe Reef, the Philippine government should “pursue, and strongly and actively call for, the enforcement of the ruling of the Permanent Court of Arbitration in The Hague.”

“I commend Secretary Delfin Lorenzana and fully support his position on the matter. It is high time that the country as one nation stands up to China’s continued incursion in the West Philippine Sea. By all accounts, it is maritime bullying,” Drilon said in a statement.

In July 2016, the Permanent Court of Arbitration ruled in favor of the Philippines and invalidated China’s expansive nine-dash line claim over the South China Sea, which includes the West Philippine Sea. Beijing has repeatedly refused to recognize the historic decision.

“A sad reality is that while the ruling is permanent, it is unenforceable. The situation is made worse when our country’s leaders and foreign policy decision-makers resort to acquiesce bordering on implied derogation of our sovereignty,” Senator Panfilo Lacson, meanwhile, said.

Lacson, chair of the Senate national defense committee, then stressed that the government should forge “stronger alliances” not only with the country’s Asia-Pacific neighbors like Australia and Japan but also with the Philippines’ long-standing Western allies like the United States and Europe.

“Only through a clear message that the presence of ‘balance of power’ in the West Philippine Sea can help us in this regard,” he said.

Lacson likewise called on Filipinos to “stand foursquare behind” Lorenzana “for making known his strong position in defending our country’s sovereign rights” over the Julian Felipe Reef.

“Even amid this pandemic, such ‘health crisis opportunism’ being applied by China does not speak well of the assumed trust and goodwill between the two Asian allies,” the senator said.

“That said, our country is losing tens of billions of pesos a year in ‘stolen’ aquatic resources, not to mention the wanton destruction of corals within our Exclusive Economic Zone that threatens our food security,” he added.

West PH Sea is ‘ours’

Senator Grace Poe, for her part, said “we must not allow our sovereignty to be trampled on and mocked.”

“The West Philippine Sea is ours. It is incumbent upon the government to defend and preserve every inch of the territory of the Filipino people,” she said in a separate statement.

She underscored the need to protect Filipino fishermen’s “right to livelihood in our seas,” adding that they are among the country’s “most vulnerable population who brave the perils of the ocean just to put food on every Filipino’s table.”

“They sail for days in order to reach fishing sanctuaries and remain there for weeks, hopeful to make a few hundreds of pesos when they sail home,” she said.

“Our government must come on strong and true to defend and protect our [exclusive economic zone]. It is its sworn duty to stand up against all acts that are inimical to the highest interest of our country and people,” Poe added.

“China should put an end to their dubious and illegal claim over our exclusive economic zone and sovereign waters. China should get their militia out of Julian Felipe [Reef],” Pangilinan said.

Last month, the Philippines filed a protest against the presence of the Chinese vessels, which were believed to be manned by personnel of China’s maritime militia.

A day after the diplomatic protest was lodged, the Chinese Embassy in Manila denied the presence of Beijing’s maritime militia at the Julian Felipe Reef, which China claims as part of Nansha Qundao, one of two political districts in the South China Sea established by the Chinese government in 2020.

The Chinese Embassy in Manila claimed the ships were fishing vessels seeking shelter in the area.

Still, the Philippines, through the Department of Foreign Affairs, demanded that China immediately withdraw its vessels and maritime assets from the West Philippine Sea.