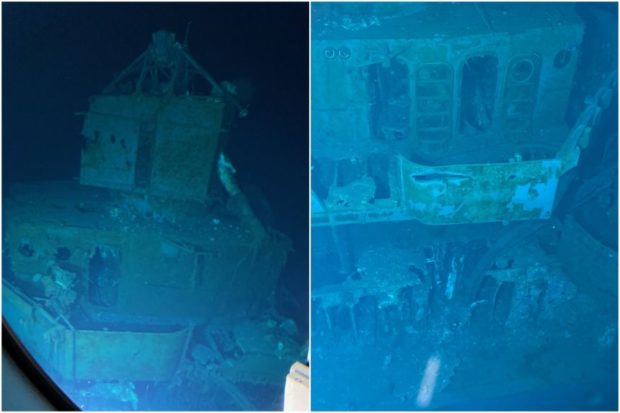 The 115m-long ship was sunk on Oct 25, 1944, during the Battle of Leyte Gulf. AFP/CALADAN OCEANIC via The Straits Times/Asia News Network

MANILA, Philippines — A US navy destroyer sunk during World War II and lying nearly 6,500 meters below sea level off the Philippines has been reached in the world’s deepest shipwreck dive, an American exploration team said.

The 115-meter-long ship was sunk on October 25, 1944 during the Battle of Leyte Gulf as US forces fought to liberate the Philippines — then a US colony — from Japanese occupation.

Its location in the Philippine Sea was discovered in 2019 by another expedition group, but most of the wreckage was beyond the reach of their remotely-operated vehicle.

“We located the front 2/3 of the ship, upright and intact, at a depth of 6456 meters. Three of us across two dives surveyed the vessel and gave respects to her brave crew.”

Only 141 of the ship’s 327 crew survived, according to US Navy records.

Team navigator and historian Parks Stephenson said the wreck bore the damage inflicted during the intense surface battle 76 years ago.

“It took fire from the largest warship ever constructed — the Imperial Japanese Navy battleship Yamato, and ferociously fought back,” said Stephenson.

Sonar data, imagery and field notes collected during the dives would be turned over to the US Navy, Vescovo said.