CHR urges Myanmar counterpart to ‘do something’ amid protests, violence 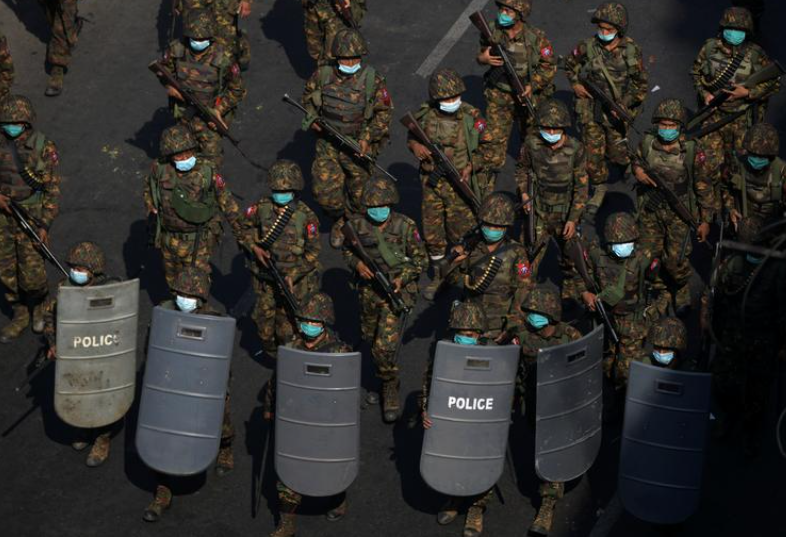 FILE PHOTO: Myanmar soldiers from the 77th light infantry division walk along a street during a protest against the military coup in Yangon, Myanmar, February 28, 2021. REUTERS/Stringer

MANILA, Philippines — The Philippines’ Commission on Human Rights (CHR) has urged its counterpart in Myanmar to “do something” about the rights situation in their country amid continued protests and violence following a military power grab.

CHR expressed its “deep concern” over the supposed silence of the Myanmar National Human Rights Commission (MNHRC) despite the alarming “blatant killings, violent dispersals, and other gross human rights violations being committed by the Myanmar military government against its people.”

According to the CHR, it is the duty of National Human Rights Institutions (NHRIs) to rise up and speak against atrocities being committed by their respective governments.

“As a member institution that we have worked with for so long in the NHRI networks that we are a part of, where we have freely and willingly shared our experiences to assist them in improving their NHRI status, we implore for them to do something about the human rights violations being committed against their people,” the commission added.

The CHR likewise reminded its Myanmar counterpart that the international community will be behind them in support of its actions towards the promotion of Myanmar people’s rights.

“As an NHRI, we believe that it is within our obligation to call out our fellow institution when we see that their people are suffering from gross human rights violations, where even the young are not spared. We believe that it is imperative to act quickly and with fortitude in responding to this urgent situation,” the CHR said.

“Finally, we highlight that on the crossroads of history, silence in the face of injustice has only ever emboldened the perpetrators. May the MNHRC be guided by the continuing cries for help of the people they are called to serve,” it added.

At least 536 civilians have been killed in protests, 141 of them on Saturday, the bloodiest day of the unrest, according to the Assistance Association for Political Prisoners.