MANILA, Philippines — President Rodrigo Duterte on Thursday asserted the Philippines’ legal victory at The Hague during his meeting with China’s envoy to the country over the presence of militia ships in the contested West Philippine Sea waters, Malacañang said.

According to presidential spokesperson Harry Roque, Duterte raised the issue when Chinese Ambassador to the Philippines Huang Xilian visited the President to greet him for his birthday. Duterte is turning 76 on March 28.

(Before the presence of the ships, the Ambassador already made an appointment to greet the President for his upcoming birthday. So it was a personal visit between two very close friends.)

(And on the side, the President reiterated what he said before the UN. He stands by and protects our territory, we believe that this can be solved through the UNCLOS and that we affirm our victory in the arbitral tribunal.) 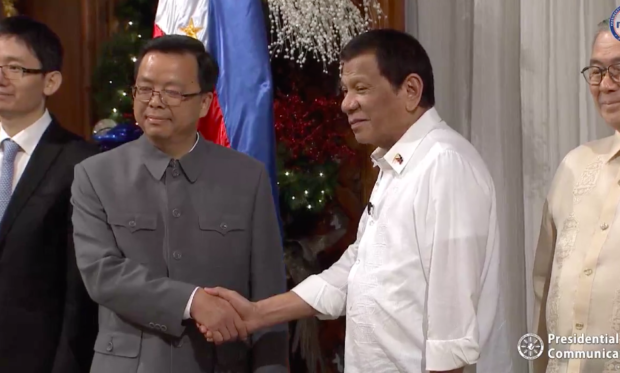 Roque was referring to Duterte’s UN General Assembly debut last year when he raised the Philippines’ legal victory against China.

(The President said we are really concerned because which country would not be concerned about that many ships?)

In response to Duterte, Roque said Huang supposedly reiterated that the 220 ships spotted at the Julian Felipe Reef in the West Philippine Sea were only fishing vessels merely “seeking refuge” from the bad sea conditions.

But Palace spokesperson Harry Roque also downplayed the latest Chinese incursion, saying there is no real controversy arising from the incident.

(I think, there is really no controversy because they are not insisting to stay there.)

Roque also said that “in the spirit of friendship,” he is expecting that China’s vessels will no longer stay in the contested waters.