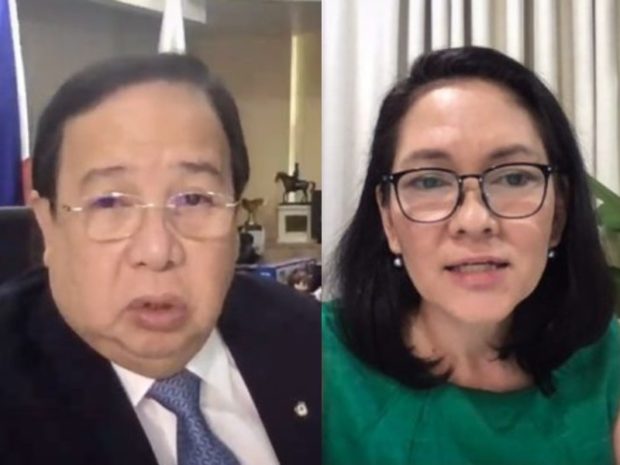 MANILA, Philippines — While Senator Risa Hontiveros fumed over China’s continued denial it has maritime militia at the Julian Felipe Reef in the West Philippine Sea, Senator Richard Gordon opted for peaceful resolution to settle the conflicts with Beijing.

“Nakakapagod ang patuloy nilang pagbabaluktot ng katotohanan para sa sarili nilang interes. China has stolen from us, and now she is lying to us,” Hontiveros said.

The Philippines has already protested the presence of some 220 Chinese vessels believed to be “manned by Chinese maritime militia personnel” at the reef, which were spotted last March 7.

But China, through Chinese Amb. to the Philippines Huang Xilian, has repeatedly denied the allegation, saying the vessels have been fishing in the area for many years and were just taking shelter from inclement weather at the time they were spotted by the Philippine authorities.

“The existence of Nansha district alone is illegitimate. How dare the Chinese embassy say that we are the ones causing ‘unnecessary irritation’? Tsina ang naglabag ng batas, bakit Pilipinas ang mag-aadjust?” she asked.

The senator called on Malacanang  to “reassess” the so-called  “friendship”  between the  Philippines and China.

She also urged the government, especially the Palace to “unanimously denounce the incivility China has directed toward our country.”

Senator  Richard Gordon also believes that China’s “coercive and destabilizing actions” in the West Philippine Sea and the South China Sea “belie its pronouncements of friendship and goodwill and affinity with the Filipino people.”

As a permanent member of the United Nations Security Council, and signatory to many treaties and international agreements and conventions, Gordon said, China should set the example of responsible governance with policies and actions that adhere to its international commitments.

He stressed that “aggression or intimidation” would not solve the conflict as it would just lead to bigger problems as seen in history.

“There are mechanisms for the peaceful settlement of disputes which can be availed of,” Gordon said, pointing out that in the South China Sea, the Philippines and other country-claimants continue negotiations for a Code of Conduct acceptable to all parties.

“It is a challenging task but a peaceful path,” he said.

“I would urge our good neighbor, the Chinese government in particular, to adopt policies and actions that contribute to peace and stability in the region, and not create an impression of a bullying neighbor,” Gordon added.