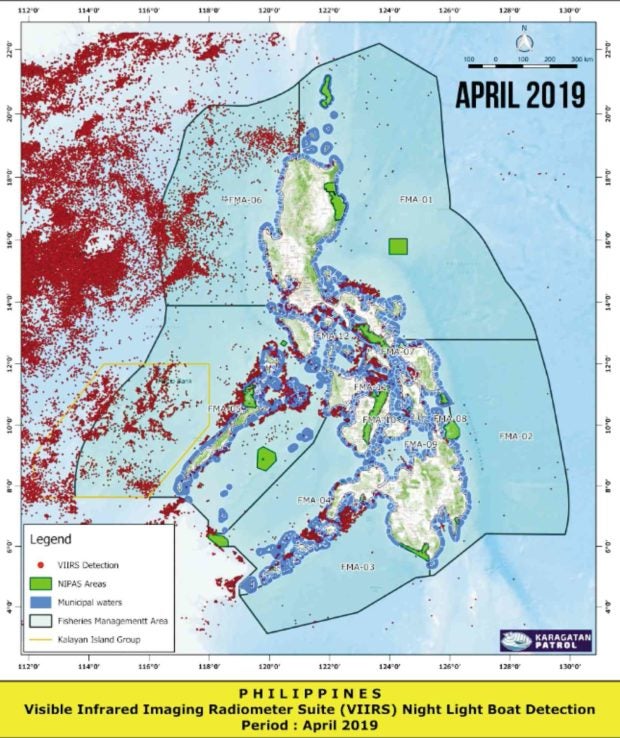 APRIL COUNT Karagatan Patrol has been watching the increase in number of foreign vessels in the West Philippine Sea every April since 2012, counting an average of 11,261 vessels in the two fisheries management areas in those waters—Recto Bank in the Kalayaan Group and Panatag Shoal, both rich in high-value fish and other marine resources.

MANILA, Philippines — China on Monday denied the alleged presence of its maritime militia at the Julian Felipe Reef in the West Philippines Sea after Manila protested the presence of over 200 Chinese ships in the area.

“There is no Chinese Maritime Militia as alleged. Any speculation in such helps nothing but causes unnecessary irritation. It is hoped that the situation could be handled in an objective and rational manner,” the Chinese Embassy in Manila said in a statement.

According to the embassy, it has been “normal practice” for Chinese fishing vessels to take shelter near Julian Felipe Reef, which China calls “Niu’e Jiao.”

“Niu’e Jiao is part of China’s Nansha Qundao (Spratly Islands). Chinese fishing vessels have been fishing in its adjacent waters for many years,” it said.

On Sunday, the Philippines lodged a diplomatic protest over the presence of around 220 vessels, believed to be manned by Chinese maritime militia personnel, in the West Philippine Sea.

The Julian Felipe Reef where the Chinese ships were spotted is located just around 175 nautical miles west of Bataraza, Palawan, according to the NTF-WPS.

Reacting to these reports, Defense Secretary Delfin Lorenzana called on China to “stop this incursion and immediately recall these boats violating our maritime rights and encroaching into our sovereign territory.”

“We are committed to uphold our sovereign rights over the WPS,” Lorenzana said Sunday, as he expressed “grave concern” over the presence of the over 200 ships in Philippine waters.

Clippers rule out Kawhi Leonard for Game 6 with injured knee