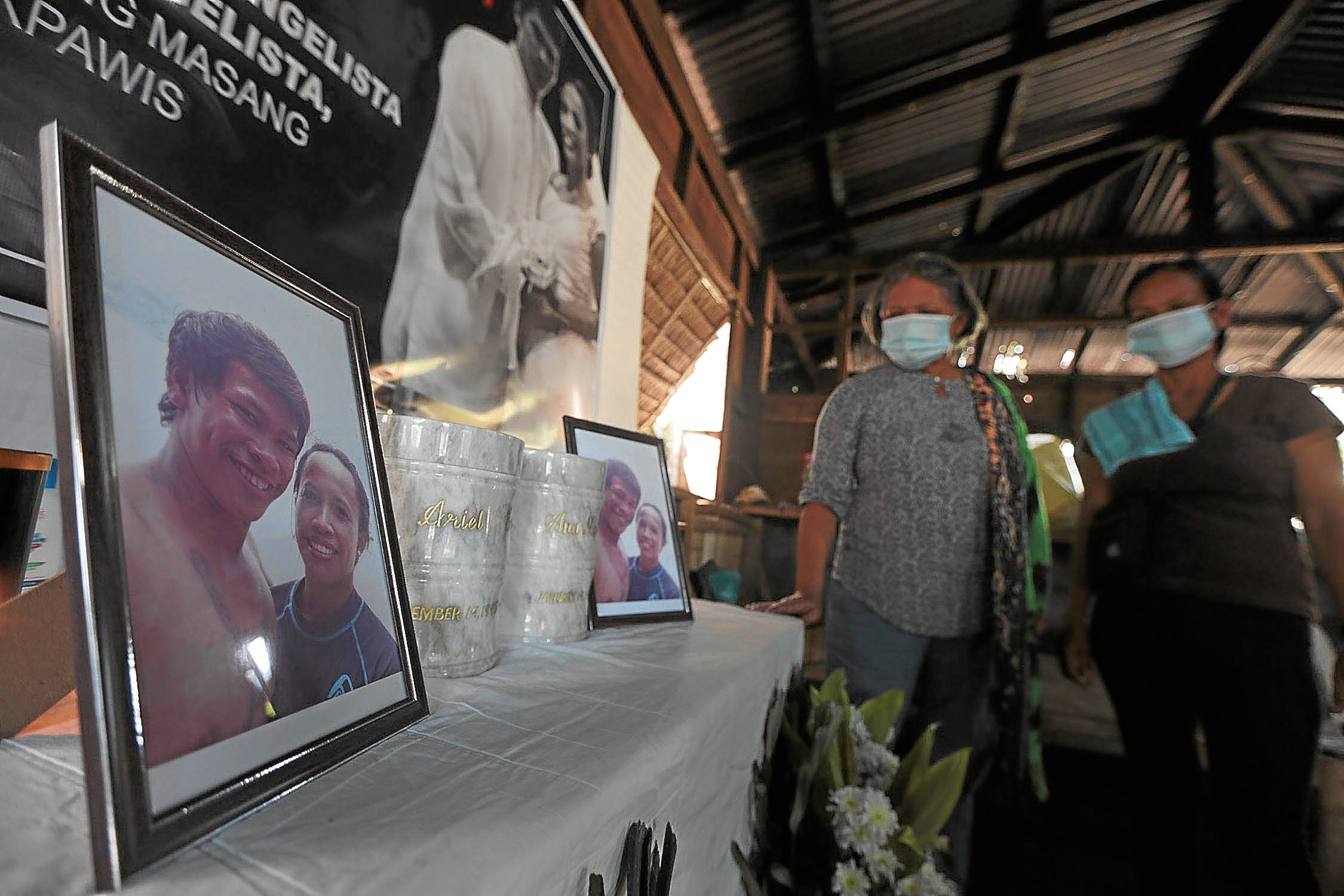 GRIEVING MOTHERS Rosenda Lemita (left) and Imelda Evangelista, mothers of spouses Ariel Evangelista and Chai Lemita- Evangelista, watch over their cremated remains on Wednesday, three days after police shot them during a raid on their house in Barangay Calayo, Nasugbu, Batangas. Evangelista and his wife were leaders of a fishermen’s group and were among nine activists killed during separate raids in Southern Luzon on
Sunday. —GRIG C. MONTEGRANDE

Malacañang on Friday said Philippine authorities must be given the chance to investigate the killings of nine activists over the weekend and promised that those found to have violated the law would be punished.

Presidential spokesperson Harry Roque said the Duterte administration would not tolerate impunity and the Department of Justice had ordered a deeper probe of the killings last Sunday in the provinces of Cavite, Rizal and Batangas.

“Impunity has no place in the Duterte administration and whoever violated the law would be held responsible and punished under the law,” Roque said in a press briefing.

Roque was reacting to a statement by a spokesperson for the Office of the United Nations High Commissioner for Human Rights (OHCHR), who was “appalled” by the “arbitrary killings.”

Roque asked the European Union (EU) to give the Philippines “a chance to discharge its obligation, to investigate, punish and prosecute those who may have breached our domestic laws.”

“The truth has to be known, so let us give the Department of Justice the chance to conduct a fair investigation,” he added.

In a statement on Wednesday night, the EU Delegation to the Philippines expressed concern over the killings during Sunday’s operation by the police, which was backed by the military.

“Reports on the use of excessive force against unarmed individuals and alleged irregularities in the law enforcement operations have raised concerns,” the statement said.

The EU welcomed the government announcement that it would investigate the killings.

It recalled the Duterte administration’s commitment to the Human Rights Council that it would ensure accountability for human rights violations and abuses in accordance with due process and in full compliance with its international human rights obligations.

Defense Secretary Delfin Lorenzana lamented that the killings had already been reported to the United Nations human rights body even before an official investigation had started.

Lorenzana said “our enemies are trying to preempt the investigation and paint us to be in the wrong.”

The Philippine National Police on Thursday said that those killed and others arrested on Sunday were members of the New People’s Army (NPA), the armed wing of the Communist Party of the Philippines (CPP).

“They are indeed NPA members hiding behind the facade of being activists,” said PNP spokesperson Police Brig. Gen. Ildebrandi Usana but he did not provide evidence.

He said the PNP had obtained 24 search warrants from the courts for the “subjects” or targets of their simultaneous raids last Sunday.

“The police just applied the law against them instead of fighting against them. On the other hand, these NPA members wanted to shoot it out with our troops instead of surrender. The rest is history,” he said.

He said that as far as the police were concerned, it did not matter whether they were communists or not but whether they violated the law, noting that the search warrants were for firearms and explosives.

“The evidence of guilt must be strong and that is what our operatives saw following the [service] of the search warrants at different locations in Calabarzon,” Usana said.

They accused President Duterte of encouraging a crackdown to silence dissent under the guise of intensified counterinsurgency operations reminiscent of thousands of deadly police antidrug operations.

Senate President Pro Tempore Ralph Recto expressed the same sentiments and called on the government to end the “dirty war” and “stop the death squads” to save democracy in the country.

In a statement, Recto said the prevailing “epidemic of unsolved killings” had rocked the people’s faith in the Philippine justice system, which was already “bleeding from a thousand wounds caused by assassins’ bullets.”

“Every time a lawyer is killed, a judge waylaid, an activist executed, a mayor ambushed, a slum teenager murdered, an agent of the state silenced, it strengthens the perception that justice is elusive and crime does pay,” he said.

Recto warned that the “mass erosion of faith” in the rule of law would “drive desperate people to take the law into their own hands,” and soon lead to the “privatization of justice” and a boom of the murder-for-hire industry. “Why would anyone still choose to sue, when a bullet can do the job faster?” he said.

He said the government should not treat activists and critics as enemies because they were needed as watchdogs. “Life and liberty are precious. And activism is not terrorism,” he said.

Members of the Makabayan bloc in the House of Representatives led by Bayan Muna Rep. Carlos Isagani Zarate on Thursday challenged the Duterte government to allow UN investigators to look into the series of killings of activists in the Philippines if it had “nothing to hide.”

Zarate said the PNP should also subject all the police officers involved in last Sunday’s killings to inquest proceedings, in accordance with its own rules pertaining to deaths during police operations.

“This procedure will establish whether there is prima facie findings or none that the ones killed actually fought back,” he said.

On Thursday, the six Makabayan lawmakers together with Albay Rep. Edcel Lagman and Quezon City Rep. Jose Christopher Belmonte filed a resolution calling for a congressional inquiry into the killing of nine activists.

The lawmakers said the killings came a day after the President ordered state forces to kill communist rebels and “don’t mind human rights.”

Lorenzana maintained that the President’s “shoot-to-kill” order was directed at communist rebels involved in armed struggle.

He agreed with National Security Adviser Hermogenes Esperon Jr. who said that the only way to handle armed rebels was to retaliate with force.

Esperon earlier said the President’s order was correct “because [communist rebels] are armed and it is unlikely you could even think of human rights then. We should think of how to defeat them.”

He maintained that “if you don’t shoot them first, you will get shot … So that order is just right in the name of peace, law and order.” —WITH REPORTS FROM JEANNETTE I. ANDRADE, TINA G. SANTOS, NESTOR CORRALES AND MELVIN GASCON