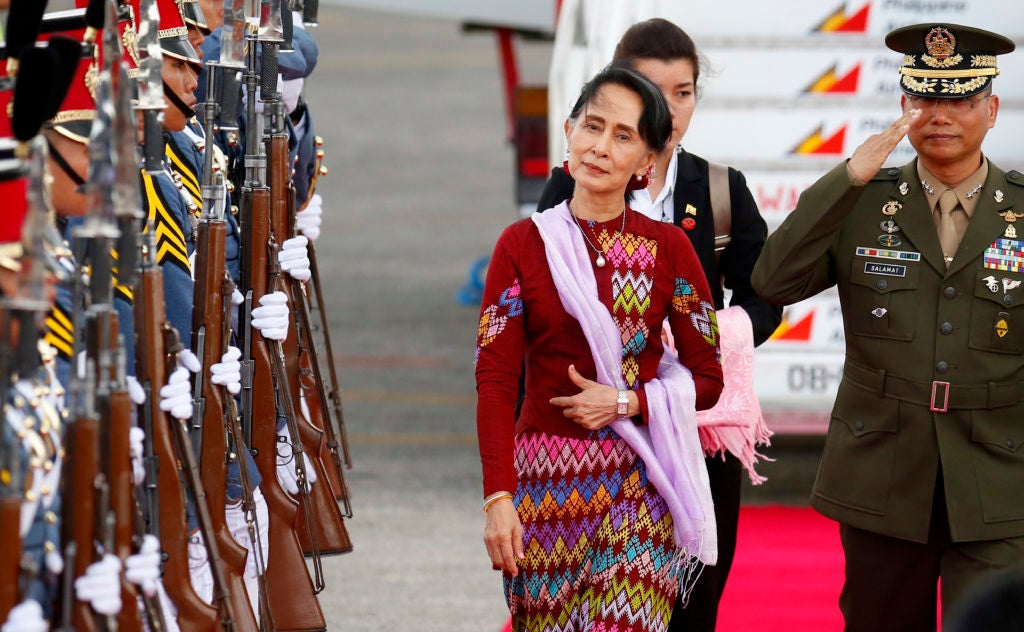 Myanmar leader Aung San Suu Kyi arrives at Clark International Airport on Saturday, Nov. 11, 2017. Suu Kyi was one of more than a dozen leaders who attended the 31st ASEAN Summit and Related Summits in Manila. (Photo by BULLIT MARQUEZ / AP)

MANILA, Philippines — The Philippines is calling for the immediate release of ousted Myanmar leader Aung San Suu Kyi, who was detained after a military power grab in the Southeast Asian country.

“Our call is for the complete return to the previously existing state of affairs: with respect to the preeminent role of Daw Aung San Suu Kyi; alongside the Army her father created for the protection of the people he led to freedom and the country he gave them at the cost of his life. This is what is needed,” Locsin told his Asean counterparts.

“And the first step should be for the immediate release of Daw Aung San Suu Kyi and subsequent dialogue among the parties involved in their country’s destiny,” he added.

Further, Locsin said Asean members should stand ready to extend help to the people and government of Myanmar.

‘This should not stop now’

Myanmar has been in chaos since its army seized power and detained elected government leader Aung San Suu Kyi and much of her party leadership on Feb. 1, alleging fraud in a November election her party won in a landslide.

“Indeed, more than ever we should help all the more. Our appeal is not from the outside but from inside what we claim is one family: a family first of peoples and not of governments; feeling the hurt in one of its members,” Locsin went on.

“In the Philippines, we have a saying: the hurt of the small finger is felt by the whole body. Myanmar is not a small finger but a big part of the two hands that together make up the family of Asean 10,” he added.

The coup, which brought a halt to tentative steps towards democracy after nearly 50 years of military rule, has drawn hundreds of thousands onto the streets and the condemnation of Western countries.

Suu Kyi endured about 15 years of house arrest between 1989 and 2010 as she led a democracy movement against the military, which has ruled for much of the past six decades.

She now faces charges of illegally importing six walkie-talkie radios and of violating a natural disaster law by breaching coronavirus protocols. The next hearing in her case is on Monday.

“As part of Asean, indeed as part of the civilized community of nations, we are deeply concerned about the recent developments in Myanmar. We are cognizant of the Army’s role in preserving Myanmar’s territorial integrity and national security, ever under threat from those who wish to break her apart and feast on her dismembered parts,” Locsin said.

“But even so we equally recognize the unifying role of Daw Aung San Suu Kyi in her country’s history and in its destiny,” he added.

Manila’s top also noted that the Philippines has “always stood by Myanmar’s side as it tried to fix its ethnic challenges.”

“We have stood by Daw Aung San Suu Kyi in particular; and defended her against calumnies from hypocrites in the West. We have hit back hard at her pro-democracy and human rights critics— not a single one of whom has done anything at all for democracy and human rights; let alone as much as she has at great risk to her life and with great loss in her life,” he said.

“We worked hard to give Myanmar back the respect due a responsible member of the community of nations moving, in the face of great challenges, towards fuller democracy. This should not stop now,” he added.

Further, Locsin urged Asean members to stand ready in extending help to the people and government of Myanmar.

‘I am so angry’: Locsin hits the West for ‘tearing down’ Myanmar’s Suu Kyi