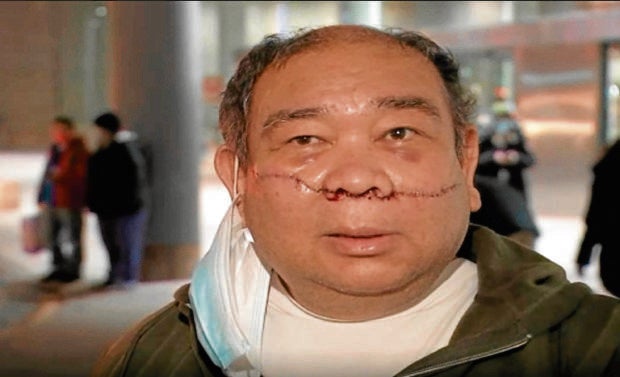 Filipino American Noel Quintana, who was slashed on his face on his way to work taking a subway train in Manhattan, is among the latest victims of attacks in the United States
targeting Asian Americans. —SCREENGRAB FROMABC7NY.COM

MANILA, Philippines — The Philippines has called the attention of the United States Department of State as well as several American senators on the rise of anti-Asian attacks there.

Philippine Ambassador to the U.S. Jose Romualdez said he sent a note verbale to the U.S. State Department last week.

(We are very concerned about it. We already called the attention of the State Department and told them about this rising number of victims of anti-Asian attacks, the government before referred to Covid-19 as the ‘China virus.’)

(A lot of our fellow Filipinos here have Chinese ancestry…they were taken advantage of, but a prominent incident was the one in New York, the slashing incident. That’s really extreme so we were really concerned about it.)

Romualdez was referring to an incident involving a 61-year-old Filipino American, who was slashed across the face in a New York subway train.

Romualdez said he also wrote letters to several U.S. senators to call their attention on the rising incidents of hate crimes against Asian Americans.

(I wrote letters to the some senators who are [part of their] justice committee and the racial discrimination committee of the U.S. Senate. I wrote to them, calling their attention to the violent incidents against Asian American here in America.)

There are 4.5 million Filipino-Americans in the U.S., according to Romualdez.

The largest Filipino community (1.5 million residents) is in California.

Earlier, the Philippine Embassy in the U.S. advised Filipinos to exercise “utmost caution” amid the recent incidents of violence against Asian Americans.