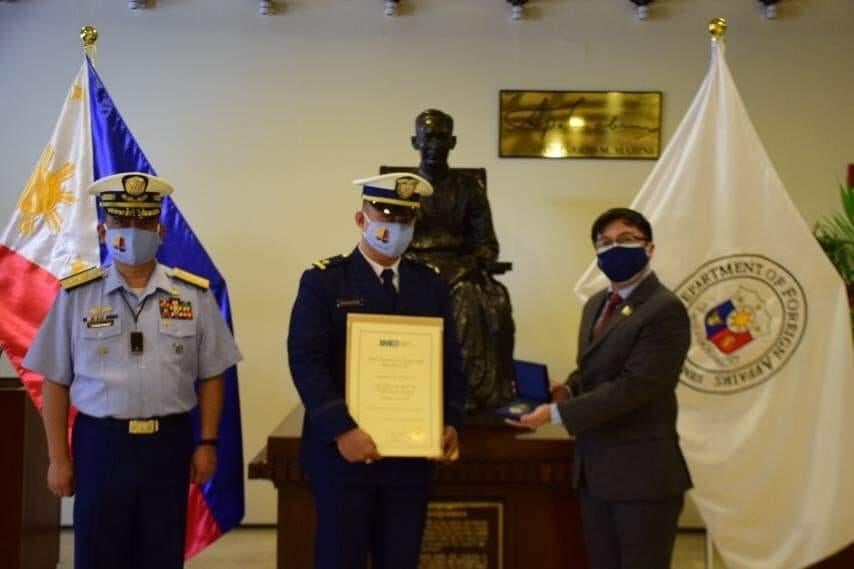 TAGBILARAN CITY—A Boholano coast guard received an award from International Maritime Organization (IMO), a UN agency, for saving 62 people in a sinking vessel in 2019, with the award ceremony being held in Manila instead of London because of the pandemic.

Ensign Ralph Ofalla Barajan, of the Philippine Coast Guard (PCG), was among the recipients of the IMO Award 2020 for Exceptional Bravery at Sea but he was the first Filipino and the first from Southeast Asia to have that distinction.

Barajan received the award at the Department of Foreign Affairs (DFA) on Wednesday (Feb. 24) instead of London, where the awards are usually given out, because of the COVID-19 pandemic.

Barajan said he was grateful for the recognition. “It is an honor to give pride to my country by becoming the first Filipino to receive the prestigious IMO Exceptional Bravery at Sea Award,” he said.

The IMO Award for Exceptional Bravery at Sea is given every year to individuals who perform acts of exceptional bravery and risk their lives in saving others at sea or preventing maritime environmental disasters.

Due to the pandemic, the awarding ceremony for 2020, that was supposed to be held at the IMO headquarters in London, was cancelled.

Barajan, 31, personally received a medal and certificate from IMO, which were presented to him by Assistant Foreign Affairs Secretary Igor Bailen, of the DFA’s Maritime and Oceans Affairs Office (MOAO).

“This award is a challenge for me to maintain the dignity of my profession and to be a consistent servant leader,” said Barajan, a father of one.

Barajan, a member of the PCG Tagbilaran, is now assigned to the PCG Nursing Service under Task Group Quarantine Facilities and Contact Tracing.

On Nov. 7, 2019, Barajan, a native of Cortes town in Bohol, was on his way to report to the PCG substation in Southern Cebu. He was off duty and among passengers of MV Siargao Princess.

The vessel departed Catagbacan Port in Loon town, Bohol for Sibonga, Cebu with 55 passengers, including Barajan, and seven crew members on board.

On the way to Cebu, the ship was battered by bus-size waves, and started to sink, throwing passengers into panic.

Barajan immediately called for help from PCG stations in Bato and Southern Cebu.

While waiting for the PCG rescue team, Barajan helped passengers and distributed lifejackets, asking the people to stay calm and seated to maintain vessel stability.

His courage and decisiveness ensured the survival of all 62 lives onboard and contributed to the successful rescue operation by the PCG.

He was able to give directions to passengers and crew when the ship began to sink.

Barajan’s heroism earned him a nomination for the award.

Nominations were checked by an assessment panel of members of nongovernment organizations in consultation with IMO.

A panel of judges meets to review the recommendations of the assessment panel and select recipients of the award.

The IMO panel of judges, chaired by IMO Secretary General Kitack Lim, decided to bestow the award on Barajan.

The others who got the award were two pilots—Marcio Santos Teixeira and Fabio Rodrigues Alves de Abreau—who helped avert a major oil spill in Brazil.