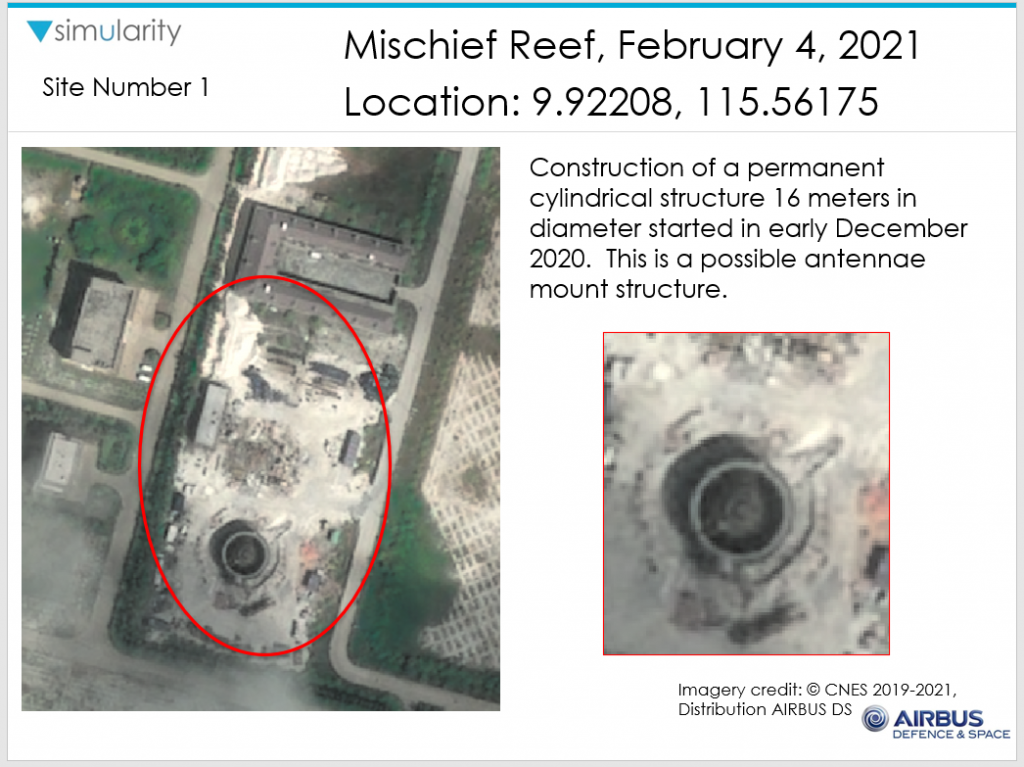 MANILA, Philippines—China continues construction on one of its occupied features in the West Philippine Sea, satellite images showed.

Simularity identified changes in seven sites on Panganiban Reef. Images taken of an area marked as Site 1, for instance, showed it was still bare as of May 7, 2020. But on Feb. 4, 2021, images showed “construction of a permanent cylindrical structure 16 meters in diameter” which started in early December 2020. It appeared to be an antenna mount structure.

Images showing an area marked as Site 2, a new, large radome cover and possible fixed radar structure appeared and which were not there a year ago.

Areas identified as Sites 4 and 7, which previously had rectangular structures a year before, have been cleared as of Feb. 4, 2021.

Possible new areas of construction have been identified in areas marked as Sites 5 and 6.

Maritime expert Dr. Jay Batongbacal said on a Facebook post that new radar facilities appeared to be in stages of completion, construction equipment and barracks were being moved around, and some areas were probably being cleared for newer buildings.

Panganiban Reef — internationally known as Mischief Reef — is located within the Philippines’ 370-kilometer exclusive economic zone (EEZ) in the South China Sea. The waters within this zone are known locally as West Philippine Sea.

The COVID-19 pandemic, which started in the Chinese city of Wuhan, did not stop China’s activities in the South China Sea in 2020.

Aside from the consistent deployment of coast guard vessels, China has upped the ante by creating two new administrative districts, giving Chinese names to all geographical features signifying ownership, launched two new research facilities, among other moves to enforce its baseless claims.

These activities prompted protests from the Philippines and Vietnam.