Rebuffed by Duterte, Lacson tells him to read Constitution 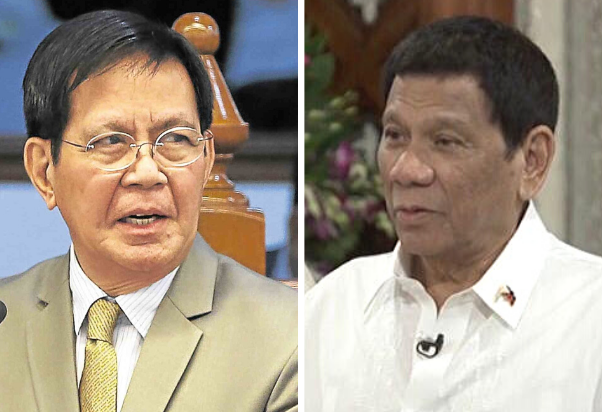 MANILA, Philippines — After being told on national television that a sitting senator had nothing to do with the issue of the country’s visiting forces agreement with the United States, Senator Panfilo Lacson is throwing the book — the 1987 Constitution, that is — back at President Duterte.

Duterte — whose administration had sought to increase the Philippines’ share of the US’ military aid to $16 billion, comparable to the aid it was supposedly infusing in war-torn Pakistan — criticized Lacson and said that he has “nothing to do with” the VFA issue.

But the three-time senator is not about to take that sitting down.

“Mr. President, read the 1987 Constitution. A senator has something to do with international agreements,” Lacson tweeted Tuesday.

Mr President, read the 1987 Constitution. A senator has something to do with international agreements:

Article VII SECTION 21. No treaty or international agreement shall be valid and effective unless concurred in by at least two-thirds of all the Members of the Senate.

Lacson cited Section 12 of Article 7 of the Constitution, which states that “[n]o treaty or international agreement shall be valid and effective unless concurred in by at least two-thirds of all the Members of the Senate.”

He further pointed to a resolution filed by 14 senators maintaining that the same two-thirds vote that ratified an international agreement is needed to terminate the same.

“That said, there is a pending petition in the SC in this regard and the issue has not been settled. All the more that as a senator, I have something to do with the president’s threat to terminate the VFA if the US doesn’t pay up,” he said in a separate message to reporters.

Lacson also noted that not even the President himself can curtail a citizen’s basic right to express his views.

“Even an ordinary citizen of this country who feels embarrassed by his harsh, undiplomatic remarks concerning an existing bilateral agreement is guaranteed under the same Constitution to express his views,” Lacson said.

“Not anyone, even he, can curtail that basic right,” he added.

The brickbats started between the two after Lacson took to Twitter over the weekend, addressing the US government that “not all” Filipinos were extortionists who demand payment for the continuation of VFA, an apparent reaction to a remark made by Duterte earlier that the US should pay if it wanted the PH-US VFA to continue.

Lacson has since deleted the tweet, saying the President probably only wanted a “fair shake of the agreement,” but that Duterte could have said it in a “more diplomatic way.”

In Monday’s briefing, Duterte claimed that the Senate had no function in deals such as the VFA since only the president was empowered by the Constitution to decide on foreign relations.

“Senators have no function at all in the matter of agreements here. It is vested in the president, and it does not need any concurrence from Congress. So the power to abrogate the VFA is in me,” he said.

Last December, Duterte said he would continue to abrogate the VFA if the US could not provide the Philippines with its Covid-19 vaccines.

Foreign Affairs Secretary Teodoro Locsin Jr. has said the Philippines and the US will iron out its differences over the VFA this month.

The VFA, which took effect in 1999 after the Senate’s ratification, provides a mechanism for visiting American soldiers and serves as the foundation for military exercises and humanitarian work.