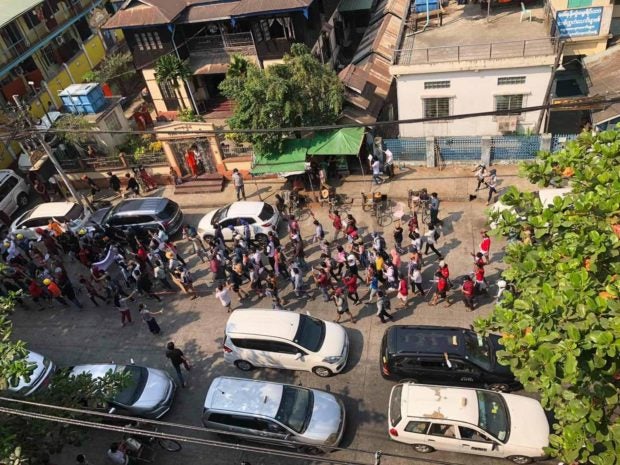 MANILA, Philippines — Thousands of individuals trooped to several areas in Myanmar to demand the freedom of detained and elected leader Aung San Suu Kyi, among them a Filipino.

EJ, not his real name, and a resident of Myanmar for almost three years, said he joined the protest in solidarity with other Myanmar residents demanding that military leaders “respect of their vote” and release their ousted political leader, Nobel Peace laureate and Myanmar President Aung San Suu Kyi.

Suu Kyi, along with other civilian leaders, were detained after an apparent military coup early this month.

“Currently, I am an advertising practitioner in one of the leading local agencies here in Myanmar. I’ve been living here for almost three years,” he told INQUIRER.net in an e-mail interview.

He added that “locals are doing their best to have peaceful but bigger and stronger rallies until they get back their stolen freedom.”

In a contributed video shared to INQUIRER.net, thousands of local protesters, who brought placards and flags, marched to the city hall, Baho Road and Sule in Myanmar.

Myanmar’s police force filed complaints against Suu Kyi for “illegally importing communications equipment.” This after last week’s military coup and detention of Suu Kyi along with other civilian politicians.