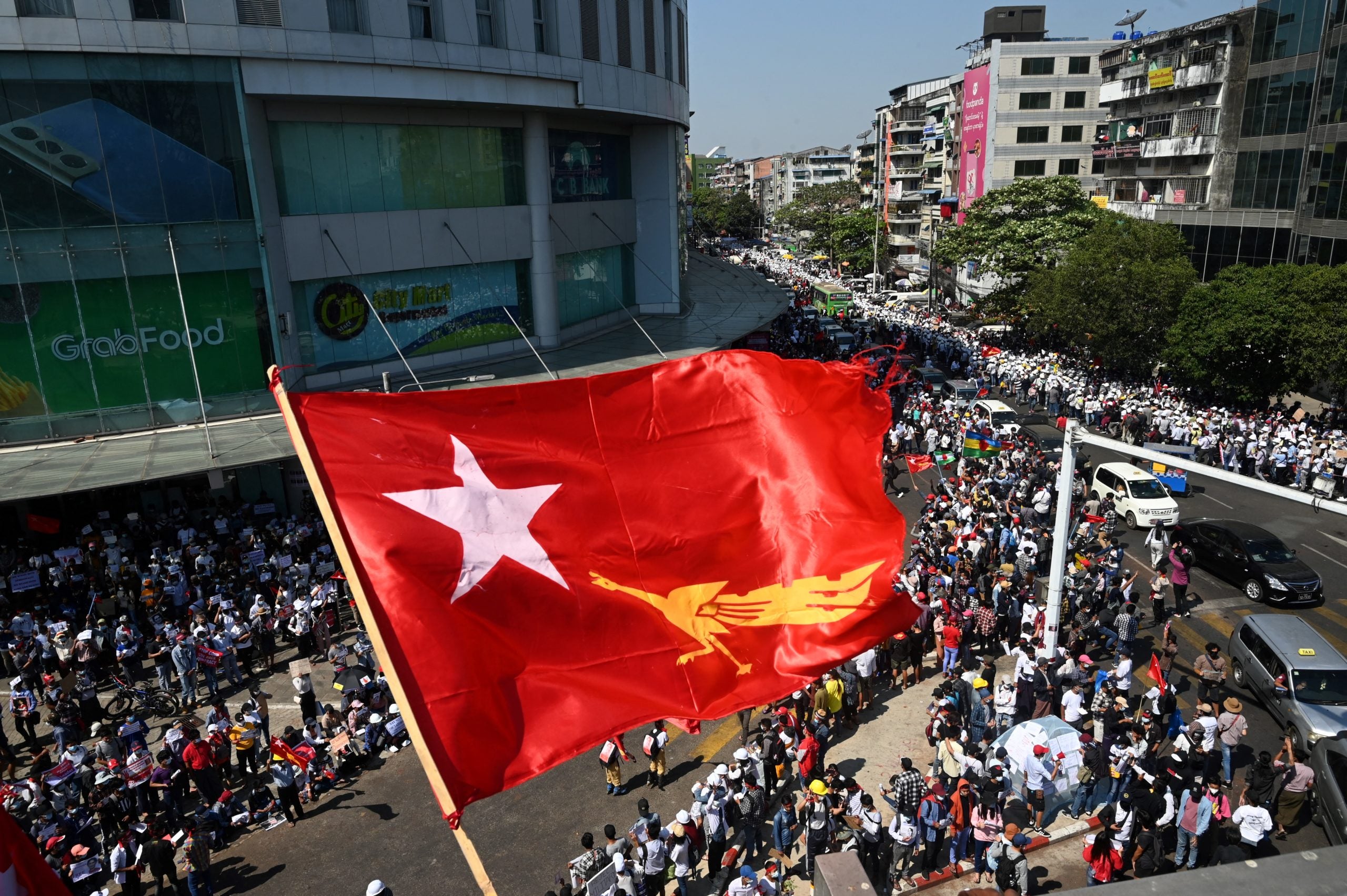 The flag of the National League for Democracy party flies over protesters taking part in a demonstration against the February 1 military coup in Yangon on February 10, 2021. (Photo by Sai Aung Main / AFP)

MANILA, Philippines — The Philippines’ top diplomat in Myanmar was authorized to undertake “drastic measures” to ensure the safety of Filipinos there should the situation escalate in the Southeast Asian country following a military power grab last week.

Philippine Ambassador to Myanmar Eduardo Kapunan Jr. said such measures include closing down the embassy and evacuating all Filipinos.

(I was given authority by the Secretary of Foreign Affairs to take drastic measures in case things escalate.)

“Like for example, I can close down the embassy, I can evacuate all Filipinos by air, by sea, whatever. So ‘yun po ang mino-monitor po namin ng husto para makagawa po kami ng kaukulang mga pamamaraan para maligtas ang mga Pilipino,” he added.

(Like for example, closing down the embassy and evacuating all Filipinos here by air, by sea, whatever. So we are closely monitoring the situation so that we can take the necessary measures to ensure the safety of Filipinos here.)

Kapunan said he has also coordinated with Bangkok’s ambassador in Myanmar for possible evacuation—should the situation necessitate—of Filipinos in Thailand, which is closer to Myanmar.

(I already talked to the ambassador of Thailand here  and they’re all willing to assist in any way so we can evacuate there by boat, by land.)

(So we are coordinating with them.)

(We also have a line-up of commercial vessels we can use.)

Based on data from the Department of Foreign Affairs (DFA), there are 1, 273 Filipinos in Myanmar as of June last year.

Many Filipinos in Myanmar work in the manufacturing industry as supervisors while some also work for the United Nations agencies and other international organizations there, according to DFA.

Myanmar’s military seized power last February 1 in a coup against the democratically elected government of Nobel laureate Aung San Suu Kyi, who was detained along with other leaders of her National League for Democracy (NLD) party in the early morning raids.

The coup followed a landslide win for Suu Kyi’s NLD in November 8 elections, a result the military has refused to accept citing unsubstantiated allegations of fraud.

The 75-year-old Suu Kyi faces charges of illegally importing six walkie-talkies and is being held in detention until February 15. Her lawyer said he has not been allowed to see her. with reports from Reuters