Leap of faith, stride for science, Fil-Ams say of their COVID shots 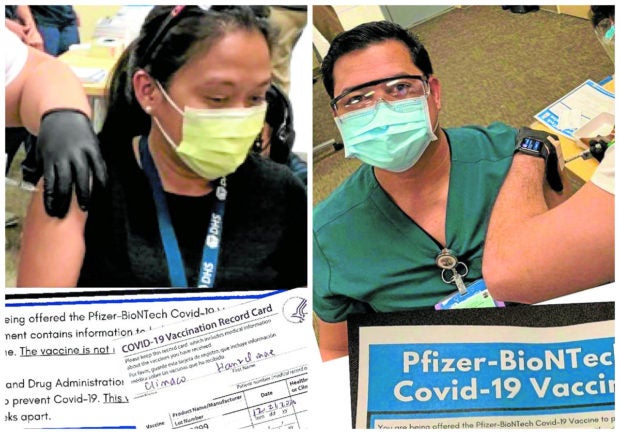 FIGHTING CHANCE Spouses Hanzelmae and Yves Climaco, both nurses based in Los Angeles, take their first dose of the Pfizer-BioNTech COVID-19 vaccine on Dec. 21. Hanzelmae says that while she knows of many people who feel anxious about inoculation, most of the other Filipinos she worked with have availed themselves of the free vaccine. —CONTRIBUTED PHOTOS

MANILA, Philippines — Getting vaccinated against COVID-19 is still a matter of debate among many people, but a number of Filipino Americans have chosen to go for it to protect themselves and their families and to be able to resume their “normal” lives.

Registered nurse Hanzelmae Climaco, 43, a nursing instructor in a major public hospital in Los Angeles, said she was “initially apprehensive” but decided to take the “leap of faith.”

“I believe in the science and I believe God made this vaccine possible,” Climaco told the Inquirer. She received the first dose of the vaccine of Pfizer and BioNTech on Dec. 21.

She said her husband, Yves, also a registered nurse, likewise received the vaccine, and that neither of them experienced a side effect other than soreness at the injection site.

A graduate of the University of the Philippines Manila, Climaco has lived in the United States for more than 20 years and used to work as an intensive care unit nurse. She said she chose to get the vaccine “because I’ve seen what COVID can do.”

“[Here] in the United States, we have the most number of cases, and the deaths in California are climbing. The vaccine is a way to help me and my family to be safe,” she said, adding:

Climaco said that while she knew of many people who felt anxious about inoculation, most of the other Filipinos she worked with had availed themselves of the free vaccine.

Getting the vaccine is voluntary “although it’s recommended,” she said.

Even before the COVID-19 pandemic, Climaco constantly feared getting sick especially because of her and her husband’s work. “Plus we don’t have control over other people’s behavior, especially those who refuse to follow [health protocols],” she said.

Climaco said the vaccine was the best thing to happen so far in the course of the pandemic, and that she missed the “interactions, gatherings, events, travelling and the freedom from worry that we would get sick.”

“A vaccine takes years to be developed. For it to be made this fast, to be made available this soon with an efficacy rate found to be effective in the trials to protect people from COVID, I think it’s worth it,” she said. “We really do not know what will happen in the future anyway, so this is at least the first step toward a fighting chance against this deadly disease.”

Jordan Geronimo, 41, a pharmacy technician at Los Alamitos Medical Center in California, was also initially hesitant to get the shot because of the possible side effects.

According to his wife, Mila, who also works in the health system in California, he eventually changed his mind and decided to get the vaccine because of the surge in cases in the United States and to protect his family, especially their three sons.

Good thing that all he feels now is a sore arm since he took the first dose of the vaccine on Dec. 21. “No fever or any other side effect as of now. He was told that most side effects are felt after the second dose,” she said.

Mila said her husband, who recently had to work longer hours due to the surge in COVID-19 cases, viewed the vaccine as “a ray of hope” against the virus. “I want to get it as well. I want to do my part to help protect my family,” she said.

For microbiologist “Ana M,” 43, receiving the vaccine made her “less fearful” in performing her job.

“But of course, I remain cautious since [the vaccine is] only 95-percent effective,” she said. “I’m getting the second dose after 21 days.”

Ana M said a sore arm and mild fatigue were all the side effects she felt. She said she wasn’t afraid of the shot because “science has been there, and the only lack then was the funding and support now.”

A medical technology graduate of the University of Santo Tomas in Manila, Ana M has lived in the United States since 1998. She said her work as a microbiology supervisor in a Los Angeles hospital entailed validating the safety and effectiveness of its testing platform for COVID-19.

She said she felt “relieved” to learn of the vaccine because “we’re really exposed to the virus although there are engineering controls to protect us.”

“You just have to adhere to safety protocols, like wearing personal protective equipment. And of course, we handle the specimens in a biological safety cabinet,” Ana M said.Mirasol Collado, an operating room nurse at North Shore University Hospital-Northwell Health in New York, is getting vaccinated next week.

She believes that the sooner the virus is quashed, the sooner people will be able to do what they normally did prior to the pandemic. “That’s what we’ve been waiting for, a vaccine to stop the spread of the virus,” she said, adding that her husband, Ronnie, who works in a nursing home, had already received a shot.

A graduate of United Doctors Medical Center College of Nursing in Manila, Collado said she was not anxious about the vaccine’s possible side effects.

“So far I have not heard of anything bad or unusual. Ronnie only experienced soreness in the injection site, which is normal. He said he felt a slight headache the day after, but it wasn’t for long,” she recalled.

“Besides,” she said, “there’s proper screening before the vaccination, and information on the vaccine is disseminated to the recipients.”

Collado said she and her colleagues were made to watch a video presentation on the vaccine, “including what you should expect when you get it, and all the possible questions one may have about it.”

“The vaccine has been tested. It’s been researched, experimented. It’s safe, and I think Pfizer … has a good reputation,” she said.

A native of San Rafael, Bulacan, Collado said she was looking forward to coming home in 2021. She said her family’s plan to do so this year was shelved due to the pandemic.

But even with the vaccine, the Filipino Americans who spoke with the Inquirer agreed that it was necessary to still observe health protocols.

“We continue to follow the recommendations to keep safe, like wearing a mask when outside the house, frequent disinfecting, staying at home,” Climaco said.

Mila also said receiving the vaccine would not change her family’s health habits.

Read Next
234 Filipinos from UAE, Bahrain flown home to PH
EDITORS' PICK
Pope Francis to miss events due to new flare up of leg pain—Vatican
Acer Philippines welcomes you to its first flagship store
More than 150 National Guard in Washington for Biden inauguration test positive for coronavirus
New Year, New Rediscoveries
PNP’s Covid-19 cases jump to 9,809; 52 new infections logged
Is your company a growth champion? Stand up and be recognized!
MOST READ
Why Kris Aquino sleeps with her pearls
AFP to apologize to UP alum falsely included in list of NPA members — Lorenzana
Ellen DeGeneres, too, is baffled by viral Filipino soda ad
Dustin Poirier knocks out Conor McGregor at UFC 257
Don't miss out on the latest news and information.