MANILA, Philippines — An official of the Department of Foreign Affairs (DFA) has urged member-states of the Association of Southeast Asian Nations (ASEAN) to uphold the 1982 United Nations Convention on the Law of the Seas (UNCLOS) whenever discussing maritime-related issues.

“We urge the members of the AMF and the EAMF to work towards fulfilling their obligations under the 1982 UNCLOS for the peace, stability, and prosperity of our region,” West said in a statement released Wednesday night by DFA. 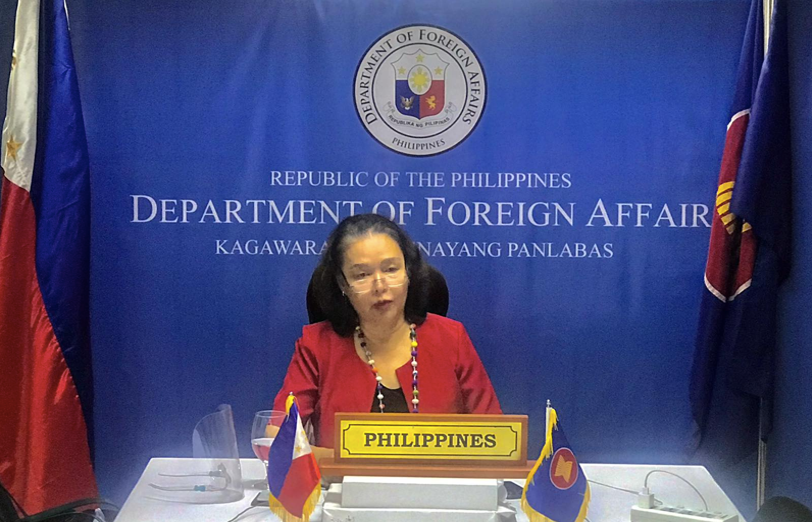 Foreign Affairs Assistant Secretary of ASEAN Affairs and ASEAN-Philippines Director-General Junever M. Mahilum-West speaks on updates on the COC negotiations during the workshop on the 10th Anniversary of the ASEAN Maritime Forum held on December 15, 2020. Photo from the DFA website

Similarly, the DFA official assured fellow ASEAN members that the Philippines remains committed to the completion of a Code of Conduct in the West Philippine Sea and South China Sea — areas that several ASEAN nations and non-members like China and Taiwan have taken a stake.

“Assistant Secretary Mahilum-West also expressed the Philippines’ steadfast commitment to achieving the early conclusion of an effective and substantive Code of Conduct in the South China Sea (COC) that is in accordance with international law, particularly the 1982 UNCLOS; and proposed the harmonization of national governance efforts with regional and international maritime cooperation frameworks, or at least the enhancement of their complementaries,” the DFA statement said

The UNCLOS has been vital to the Philippines’ defense of its rights to its exclusive economic zone, as it has been used in the arbitral complaint filed by the country against China, for its intrusion in the West Philippine Sea.

It was also instrumental in trashing out China’s nine-dash line claim, with former solicitor general and former Supreme Court associate justice Francis Jardeleza explaining that the UNCLOS provides that rights to the land near the sea must be owned first before claiming right to the sea.