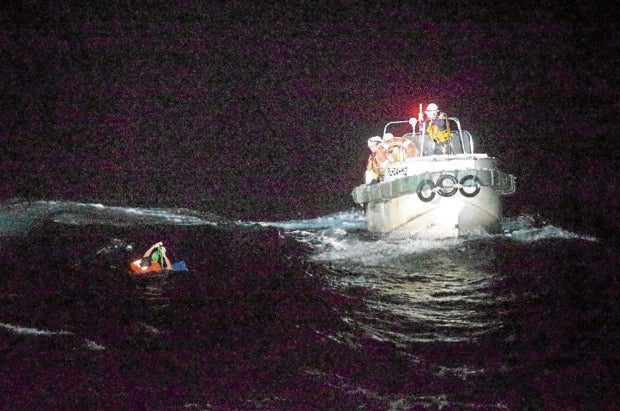 FILE. A Filipino crewman of the cargo vessel Gulf Livestock 1 is rescued by a Japan Coast Guard boat during a search and rescue operation at the East China Sea, west of Amami
Oshima Island in southwestern Japan. — REUTERS

MANILA, Philippines — Labor Secretary Silvestre Bello III claimed Thursday that the owner of the capsized Gulf Livestock 1 has stopped paying the salaries of the 36 missing Filipino seafarers, a matter opposed by the Philippine government.

At a year-end press conference, Bello said the position of the Department of Labor and Employment (DOLE) and the Philippine Overseas Employment Administration (POEA) remains firm that the salaries of the missing seafarers should still be paid.

(The owner of the ship, since the ship capsized, won’t pay the salaries of the seafarers… Until a competent authority has declared that the ship is gone, the seafarers are still entitled to the continuation of their allotment, they should still be paid.)

(If the owner won’t pay, we will go to the seafarers’ manning agency.)

Gulf Livestock 1 went missing and was reported to have capsized last September 3 in the East China Sea on its way to China from New Zealand due to Typhoon Maysak. It was carrying 43 crew members — 39 of whom are from the Philippines, while the remaining four are from New Zealand and Australia.

The Japanese Coast Guard has so far rescued two Filipinos while the body of another Filipino was retrieved.

‘Kins have accepted their fate’

Bello said the families of 25 of the 36 still missing Filipino seafarers have “already accepted the fate” of their loved ones, according to Bello.

Bello said the death benefits from the Overseas Workers Welfare Administration (OWWA) for the kin of the 25 missing seafarers are now being processed.

“The next of kin of the 25 already accepted the fate of their loved ones so prino-process na yung claim ng kanilang mahal sa buhay,” the labor chief said.

He said DOLE has been regularly in touch with the families of the missing seafarers and holding meetings with them once a week.

(We are meeting the next of kin of the seafarers at least once a week, through the Zoom conference. In fact, last we, we informed them that there’s still no positive development on the search and rescue operations. In the meantime, we are addressing the issue on the allotment of salaries because the owner of the ship, since the ship capsized, won’t pay the salaries of the seafarers.)

OWWA Administrator Hans Leo Cacdac, likewise, said the families of the missing seafarers have been given several forms of assistance.