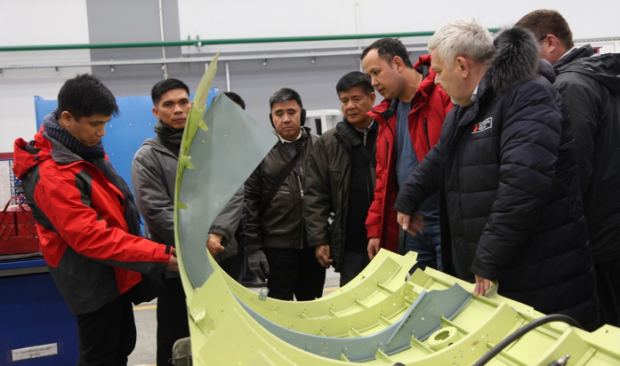 Representatives from the Department of National Defense and Armed Forces of the Philippines inspect the manufacturing and assembly lines of the Mi 171 helicopters at the Ulan Ude Aviation Plant in Russia in March 2020. DFA

MANILA, Philippines—US sanctions could drive the last nail on the coffin of the Philippine Air Force’s planned acquisition of Russian heavy-lift helicopters.

President Rodrigo Duterte, who has been warming up to Moscow since taking office in 2016, announced last January that the Philippines was buying cargo helicopters from Russia.

The planned purchase, however, could run into conflict with the US’ Countering America’s Adversaries Through Sanctions Act (CAATSA) which punishes countries with major deals with Russia’s defense sector.

CAATSA was enacted to punish Russia for meddling in US elections and aggression in Ukraine.

Philippine Defense Secretary Delfin Lorenzana said CAATSA could “derail” the potential defense deal with Moscow which would have been the country’s first major procurement of Russian military equipment.

“Will the procurement be covered by the US CAATSA? Most probably yes. And that could affect the project,” Lorenzana told INQUIRER.net.

The US, he said, had warned the Philippines that a possible deal with Moscow would be covered by CAATSA.

“They said the sanction could be applied to military equipment procured from Russia,” Lorenzana said.

As CAATSA threatened to derail the Russian deal, the defense secretary said the PAF was already setting its sights on acquiring more Sikorsky S-70i Black Hawk combat utility helicopters instead.

“Because of the possible sanction on procurement from Russia, the Philippine Air Force is considering [to buy] the Black Hawk helicopters,” Lorenzana said.

At the commissioning of the first six of 16 new Black Hawk helicopters last week, Lorenzana said the PAF expressed interest in acquiring 16 more units from Poland’s PZL Mielec and that “chances of that being fulfilled is very big.”

The Philippine defense department also appeared to be moving ahead with its purchase of attack helicopters from Turkey, despite new sanctions imposed by the US on Ankara over its purchase of Russian S-400 missile defense system.

Lorenzana said the deal to acquire attack helicopters from Turkey, which would rely on US-made engines, will not be disrupted by Washington sanctions.

“The Turkish government has assured us that they will get the engines,” he said without elaborating.