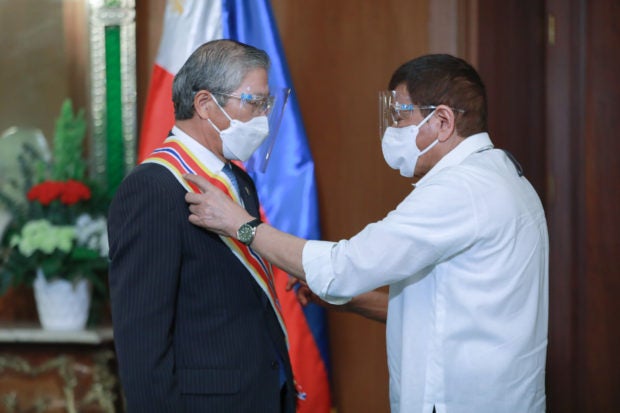 President Rodrigo Roa Duterte confers the Order of Sikatuna with the rank of Datu on outgoing South Korean Ambassador to the Philippines Han Dong-man who paid a farewell call on the President at Malacañang Palace on December 10, 2020. (ACE MORANDANTE/ PRESIDENTIAL PHOTO)

In a statement released Friday, Malacañang said Duterte congratulated Han for a successful tour of duty in the Philippines.

Duterte conferred on Han the Order of Sikatuna, with the rank of Datu (Grand Cross), Gold Distinction.

The Order of Sikatuna is the national order of diplomatic merit conferred upon diplomats, officials, and nationals of foreign states who have rendered exceptional and meritorious services in fostering, developing, and strengthening relations between their country and the Philippines.

During Han’s tenure, the Palace said the Philippines and South Korea “increased the frequency of high-level exchanges and interactions.”

Duterte and South Korean President Moon Jae-in met several times on the sidelines of multilateral meetings and during the former’s bilateral visit to Seoul in 2018 and to Busan for the ASEAN-Republic of Korea Commemorative Summit last year. 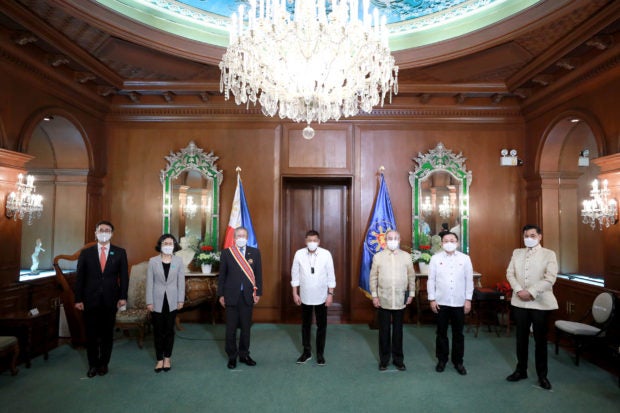 The President also acknowledged the South Korean government’s assistance in the repatriation of 2,137 Filipinos.

For his part, the Korean diplomat thanked Duterte for the latter’s commitment to elevate the special ties between the Philippines and the Republic of Korea which the President described as “at its highest levels so far”.

The Senate earlier adopted a resolution commending Han “for his efforts in strengthening bilateral relations and cooperation” between the Philippines and South Korea.