‘It was meant to be’: Filipino crew rescues man clinging to capsized boat 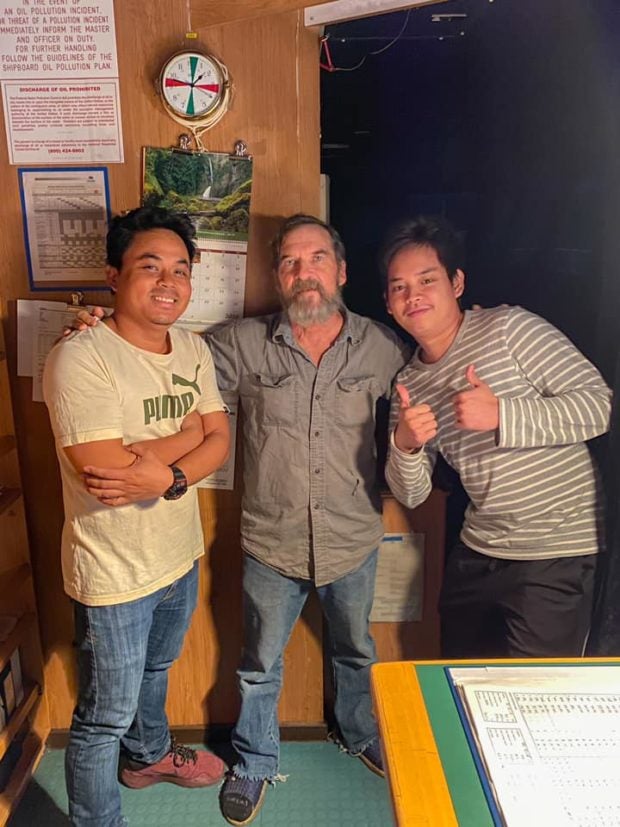 A 62-year-old man stranded at sea is home safe and sound, thanks to the help of Filipino seafarers who spotted him at Florida’s east coast.

Stuart Bee went sailing on Friday, Nov. 27, at 4 p.m., departing from Cape Marina in Port Canaveral. He was reported missing the next day by a member of Cape Marina, who said that it was unusual that Bee would stay overnight on his boat, as per a statement from the United States Coast Guard.

It turned out that Bee’s 32-foot boat experienced mechanical issues on Nov. 28, the Daily Mail reported on Nov. 30. The sailor woke up to water filling up his cabin around Sunday after midnight.

By chance, help was on the way. The third officer of the cargo ship MV Angeles spotted the boat at around 10 a.m. on Nov. 29, Angeles second officer LaCruiser Relativo told INQUIRER.net. He said that when the ship got closer, the officer saw Bee waving his shirt atop his boat. He then sounded the alarm and called the captain.

The ship comprises 23 crew members, 16 of whom are Filipinos, said Relativo, 32, who hails from Davao City.

“The success of his rescue is a team effort. And we came just in time,” he said. “I used to say, it was meant to be.”

As the medical officer on board, he attended to Bee. “When Mr. Stuart [was] about 20 meters away from us, I threw the life-ring. When he finally [embarked] the ship via ladder, I asked him many questions.” 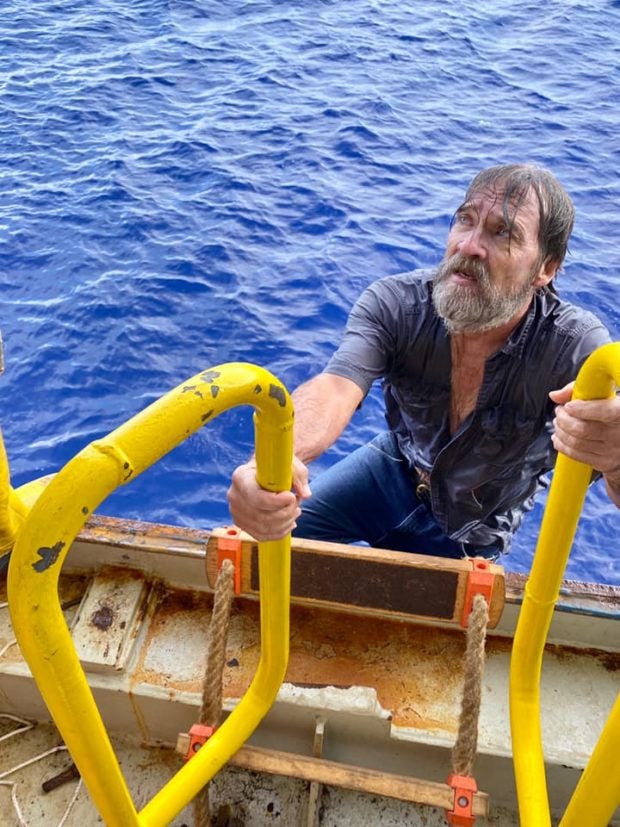 Stuart Bee ascending the MV Angeles on Nov. 29 after being stranded out at sea (Image: Facebook/@lacruiser.relativo)

He recalled that Bee asked him what day it was, and he told him it was Sunday, Nov. 29.

“He made [the] sign of the cross after hearing me, a picture on my mind I will live to remember,” he said.

Crew members rushed in to help, with some offering him socks and jeans. Relativo said he decided to give him his “lucky shirt,” the same one he uses for job interviews. Luck has been on his side, as he is living his childhood dream job—he has always had a passion to explore the world. 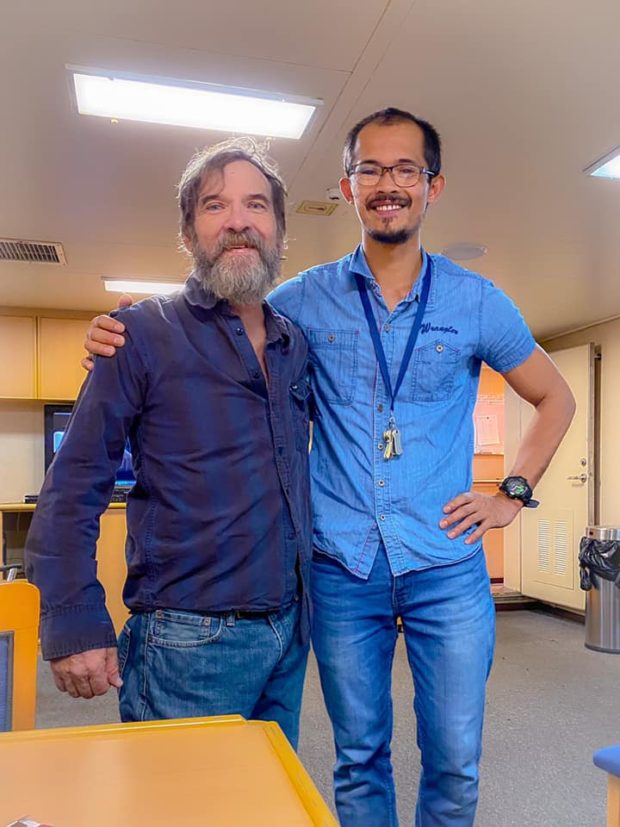 “He was lucky too that in the vastness of ocean, our course crossed in the Atlantic,” Relativo said of Bee as he recalled the fateful encounter on Facebook last Nov. 30.

Bee shared his brush with tragedy over a cup of coffee with Relativo. “In his words, ‘If it was my last days at that moment, I knew I had a good life. In the evening, I was actually looking at the sky. Looking at the moon, the stars— it’s beautiful. And I realized that I had a good one.’”

Just as Bee and his family are grateful for a life saved, the crew too have been touched by Bee’s presence.

“It was my first rescue operation in my 12 years at sea. However, it was [the] one story that [has] made an impact on me and [will] inspire me forever,” said Relativo. 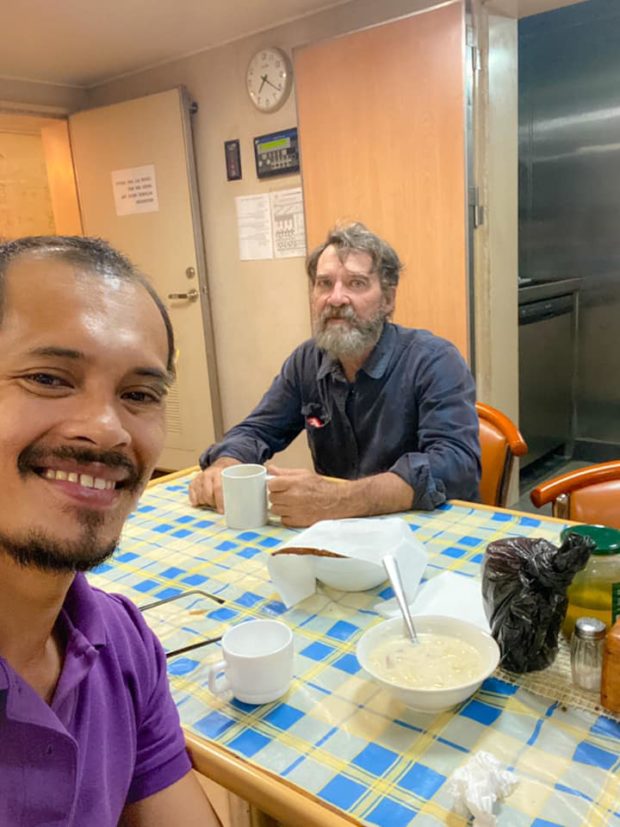 The brush with mortality gave way to reflections on spirituality.

“Like Mr. Stuart Bee, at some point in our lives, we will be placed in a situation where our only hope is Him,” he said.

“I don’t consider myself to be religious. But as he made [the] sign of the cross climbing the ship’s ladder, his faith helped him walk in waters.

“It is when you have [a] deep encounter with what I call [a] ’higher being’, [that] you will realize that you know nothing but at the same time you understand so much.”

Relativo noted too that life lessons from the rescue apply to each person’s daily life.

“May this story bring hope to everyone [especially] in [these] unprecedented times. Our battle with the pandemic is far from over. All around the world, we have seen difficulties in waging this war,” he remarked.

“But I believe that when we help someone, it is the only thing we cannot fail. As an individual, as an entire nation.”  /ra