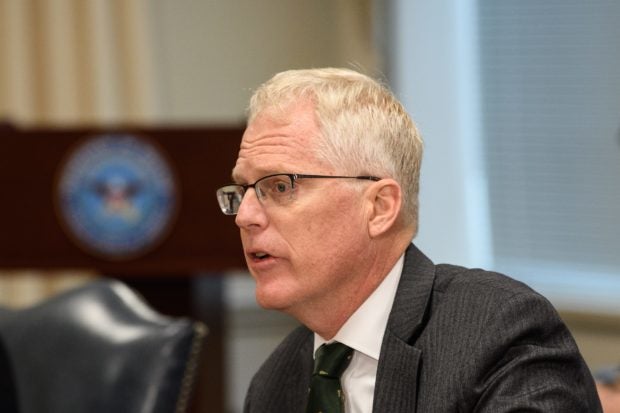 MANILA, Philippines—Acting US Secretary of Defense Christopher Miller will visit the Philippines on Tuesday (Dec. 8) in an apparent attempt to highlight Southeast Asia’s importance to the United States.

Miller was appointed by outgoing US President Donald Trump to replace Mark Esper last Nov. 9 following a fallout between Trump and Esper over the use of soldiers to quell protests in the US.

The Philippines will be Miller’s next stop after Indonesia. It would be his first trip as acting US defense chief to Manila.

He is also scheduled to visit the US-Indo Pacific Command headquarters in Hawaii, according to reports.

A Philippine official privy to the meeting said the Visiting Forces Agreement (VFA) and the South China Sea will be on the agenda of the meeting with Miller.

The Philippines suspended the effectivity of its termination of the VFA with the United States last month, but negotiations continue for a long-term arrangement.

Locsin and Lorenzana, who pushed for a review of the VFA rather than its outright termination, earlier said that the Philippines’ other bilateral agreements with the US cannot be implemented without the VFA, which provides the legal framework.

President Rodrigo Duterte scrapped the VFA last February in response to the revocation of the US visa of Sen. Ronald Dela Rosa, his former police chief who led his war on drugs.

In June, the Philippines backtracked from the termination that was supposed to take effect in August due to “political and other developments in the region.” The suspension “shall continue for 6 months.”

But in November, the Philippines said the suspension of the termination will be extended by another six months. This will give the new US administration under Joe Biden, who will assume on Jan. 20, more time to negotiate a more stable arrangement.

The Philippines and US share concerns on China’s increasingly assertive behavior in the South China Sea.

Miller’s trip to Manila follows other senior US officials’ visit in the past weeks—National Security Adviser Robert O’Brien and Secretary of the Air Force Barbara Barrett.

O’Brien had promised that the Philippines could count on the US when push comes to shove in the South China Sea.

“We got the Philippines’ back when it comes to the South China Sea,” he said, reiterating a statement made by Secretary of State Mike Pompeo’s during his Manila visit in 2019.

O’Brien said his visit to the Philippines meant that US foreign policy would stay the same regardless of who occupies the White House.

“We’re here to let people in Asia know, especially our close friends like the Philippines know, America’s not leaving, we’ve got your back,” O’Brien had said.

“We’re here and whatever happens in the domestic politics of the United States, this is a critical alliance for us,” O’Brien added.

Read Next
This World Diabetes Day, Filipinos aim to defeat Diabetes Together
EDITORS' PICK
Lacson advises vaccine czar to ‘watch his back’
New Year, New Rediscoveries
Climate advocates among first to cheer new US president
Acer Philippines welcomes you to its first flagship store
CHEd steps into UP-DND row over ‘problematic’ accord, to broker talks
Is your company a growth champion? Stand up and be recognized!
MOST READ
Nissan to shut down Laguna plant
Lacson advises vaccine czar to ‘watch his back’
IATF OKs licensure exams scheduled from January to March 2021
ABS-CBN makes bigger free TV comeback via TV5 partnership
Don't miss out on the latest news and information.

Climate advocates among first to cheer new US president

CHEd steps into UP-DND row over ‘problematic’ accord, to broker talks

CHEd steps into UP-DND row over ‘problematic’ accord, to broker talks