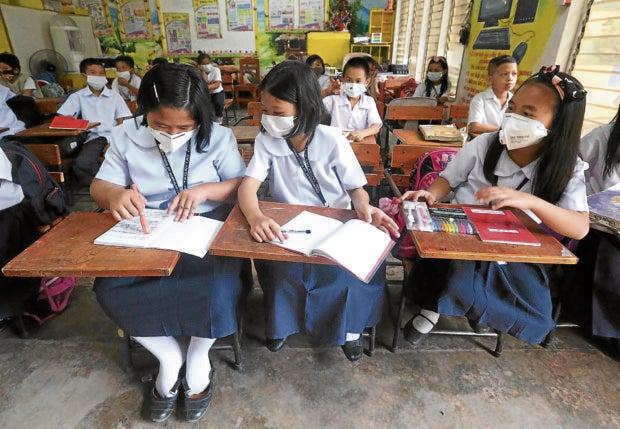 LEARNING GAPS Filipino students in Grade 5 are likely to struggle toward secondary school as most of them do not meet minimum proficiency in reading, writing and mathematics, according to a comparative study conducted by the United Nations Children’s Fund in the Philippines, Vietnam, Laos, Myanmar and Malaysia. —INQUIRER FILE PHOTO

MANILA, Philippines — The Department of Education (DepEd) on Wednesday vowed to act on gaps in the basic education curriculum after primary school pupils in the Philippines performed poorly in a regionwide assessment of reading and mathematical and writing literacy.

Results of the 2019 Southeast Asia Primary Learning Metrics (SEA-PLM) showed that 27 percent of Filipino pupils in Grade 5 were only able to recognize single words, while only 10 percent of them developed reading proficiency to allow their proper transition to secondary education.

A high percentage of Filipino students were also in the lowest bands for mathematical and writing literacy.

The Philippines joined the first SEA-PLM, a pen-and-paper large-scale assessment for students conducted by the United Nations Children’s Fund (Unicef), in February 2019.

The assessment focused on the reading, writing and mathematical literacy of students in Grade 5, the level at which they were about to transition to secondary education.

Tests were administered in the official languages of instruction in Grade 5 in each country.

The Philippines’ performance in reading literacy showed a glaring difference from some of its neighboring countries, particularly Vietnam.

In Vietnam, 82 percent of the 4,837 Grade 5 students who participated in the assessment belonged to Band 6 and above, showing that “they were proficient in understanding, using and responding to texts with familiar structures.”

“They demonstrated skills that are consistent with the definition of reading literacy in the SEA-PLM 2019 assessment framework,” the report said.

“This means, however, that approximately seven out of 10 students were not yet reading at a level where they can understand, use and respond to a range of written texts in order to meet their ends,” it added.

Skills only for first years

On mathematical literacy, 41 percent of the 6,083 students in the Philippines belonged to Bands 2 and 3, which meant that they recognized simple shapes and compared angles while some might be able to add single-digit numbers together.

These are skills expected only during the first years of primary school, according to the report.

Children under the Band 3 category scored 269 to less than 282 points, while those in Band 2 and below scored less than 269 points.

Forty-two percent of the Vietnamese students belonged to Band 8 (334 to less than 347 points), meaning they could “think multiplicatively and convert between units” and solve problems using many-to-one pictographs.

According to the report, these skills were essential when transitioning to secondary education.

The Philippines showed an even more dismal performance in writing literacy, in which 45 percent of the students only had limited ability to present their ideas in writing, while only 1 percent could write cohesive texts with detailed ideas and a good range of vocabulary.

“Children who do not meet a minimum proficiency in reading by Grade 5 will likely struggle to transition to secondary school,” the report read.

The way the Philippines fared in the SEA-PLM 2019 was reminiscent of its performance in the Programme for International Student Assessment (Pisa) 2018, in which the country ranked second lowest out of 79 countries in both mathematical and scientific literacy.

“Our participation in the first ever cycle of SEA-PLM signifies our continued commitment to raising the quality of basic education in the country,” the DepEd said in a statement.

Its results “complement” the Pisa 2018 findings, it said, adding that these will be integrated “into our broader efforts to address curriculum and learning gaps.”

“We are determined to translate these international assessments into concrete and implementable actions, especially in the classroom where actual learning takes place,” it added.

The DepEd maintained that it had made progress in its campaign for quality education in the country, dubbed “Sulong Edukalidad,” which pursued four pillars of “aggressive reforms” for quality:

• K to 12 curriculum review and update

• Engagement of stakeholders for support and collaboration

At a recent press briefing, DepEd chief of staff Nepomuceno Malaluan cited the need to clearly articulate learning competencies across all grade levels and learning areas “to avoid any confusion about the content to be taught.”

In Pisa 2018, experts said Filipino learners found it difficult to answer items that required integrating and generating inferences; public, occupational and personal situation-based items; and open-source items, among others, which could be solved by upskilling and reskilling teachers.

The DepEd has since formed a technical working group for international large-scale assessments in preparation for the next round of Pisa in 2022, which was originally set to be administered in March 2021 but was delayed due to the COVID-19 pandemic.

The 2019 SEA-PLM also found that children studying in larger institutions, where they were provided one textbook each, performed better than children in smaller, less well-resourced schools.

In both the Philippines and Laos, around 20 percent of Grade 5 students shared textbooks in reading and mathematics, while some textbooks were shared by more than two students.