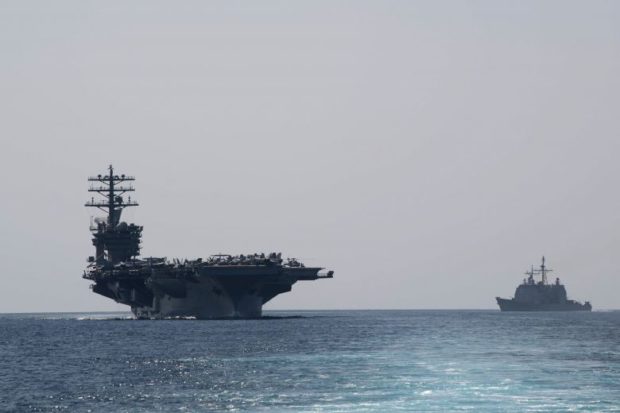 WASHINGTON — The Secretary of the United States Navy has called for the Navy to establish a new fleet closer to the intersect of the Indian and Pacific Oceans.

His remarks were reported in USNI News, the journal of the US Naval Institute.

“We want to stand up a new numbered fleet,” he said. “And we want to put that numbered fleet in the crossroads between the Indian and the Pacific Oceans, and we’re really going to have an Indo-Pacom footprint.”

“We have to look to our other allies and partners like Singapore, like India, and actually put a numbered fleet where it would be extremely relevant if, God forbid, we were to ever get in any kind of a dust-up,” he said.

“More importantly, it can provide a much more formidable deterrence,” he added.

Mr Braithwaite said he had not spoken with the Acting Secretary of Defense Christopher Miller about the plan, but had otherwise “crossed all the other T’s and dotted all the other I’s.”

“So we’re going to create the First Fleet,” he said. “And we’re going to put it, if not Singapore right out of the chocks, we’re going to look to make it more expeditionary-oriented and move it across the Pacific until it is where our allies and partners see that it could best assist them as well as to assist us.”

Mr Braithwaite said he would be traveling to India in the coming weeks to discuss security challenges and how the US and Indian navies could help each other.

The US alone could not stand up to China, and nations around the Pacific and around the globe needed to assist in pushing back Beijing militarily and economically if there was a chance for deterrence to work, he stressed.

His remarks came even as the US Pacific Fleet tweeted a picture of the USS Nimitz Carrier Strike Group joining phase two of the annual Malabar naval exercises in the northern Arabian Sea alongside the navies of Australia, India and Japan, on Nov 17. The four countries make up the group called the Quad – short for the Quadrilateral Security Dialogue.

Analysts said the First Fleet plan signals to China that the US is not leaving the region but is rather coming closer.

“It sends to allies the same message that we are staying and not just via words but actions,” said Dr Aparna Pande, Research Fellow and Director of the Initiative on the Future of India and South Asia, at the Hudson Institute in Washington.

“The Indo Pacific is here to stay for the US military as can be seen from the gradual progression: Fonops (freedom of navigation operations in the South China Sea) and capacity building of allies,” Dr Pande said.

“Pacom became Indo Pacom; there have been logistical agreements with countries in the region including India; and this week the Malabar exercises with the Quad.”

Mr Derek Grossman, a senior defense analyst at RAND who is focused on national security policy and the Indo-Pacific, tweeted that the US Navy plans to “double-down on the ‘Indo’ part of the Indo-Pacific”.

“If the US Navy goes ahead with establishing a First Fleet in the Indian Ocean Region, it will reaffirm that Washington continues to view Asia strategy through an ‘Indo-Pacific’ lens, that is, not just focusing on the Western Pacific,” Mr Grossman told The Straits Times.

“The US likely seeks to leverage the Indian Ocean Region as part of a strategy to compete with and counter China, and, importantly, India is increasingly favorable towards such an approach.”

Currently, the US Navy’s Seventh Fleet operates out of Japan, covering a vast space all the way to the India-Pakistan border.

Adding a First Fleet – which the Navy has had on the books as “inactive” as it was active only from after World War II until the early 1970s – would alleviate some of the strain on the Seventh Fleet, and allow the two fleet commanders to give more attention to a smaller number of allies and partners and a smaller amount of geographical space, USNI said.

But Mr Braithwaite provided no details on the strength of the proposed First Fleet, or how operations would be differentiated or coordinated with the Seventh Fleet.

Read Next
Indian vaccine maker vows PH access to COVID-19 vaccine once available
EDITORS' PICK
Filipinos to experience TECNO Mobile’s bolder Spark 6
The Grand Midori Ortigas: Zen oasis in the city
Smart widens gap vs competition on 4G availability, wins Opensignal’s first 4G Coverage Experience award
Gov’t eyes use of P73.2 billion in loans to buy COVID-19 vaccines for 60 million people
DOH chief warns of possible uptick in COVID-19 cases after holidays
Solon bats for extension of current school year to July 2021
MOST READ
Former ABS-CBN ‘Sky Patrol’ Ricky Velasco passes away
I can’t probe House members getting kickbacks; I have no jurisdiction – Duterte
Lawyer slain by gunmen on his way to his law firm in Cebu City
US donates $18M worth of weapons system to PH to fight terrorism
Don't miss out on the latest news and information.