PH, US execs meet after VFA gets extended lease on life | Global News

PH, US execs meet after VFA gets extended lease on life 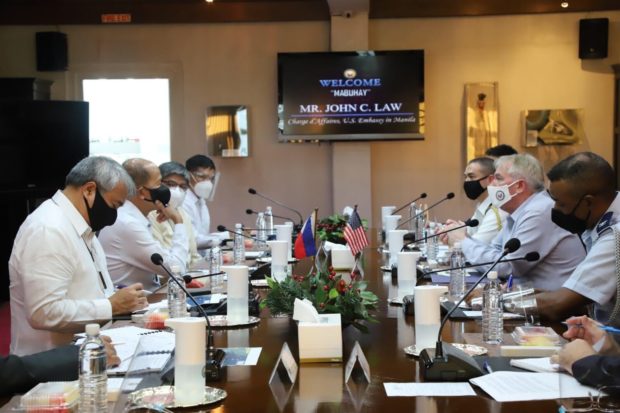 MANILA, Philippines — Philippine Defense Secretary Delfin Lorenzana met with a US Embassy official last Friday (Nov. 13) just a few days after the administration of President Rodrigo Duterte kept the Visiting Forces Agreement (VFA) alive for another six months after deciding to junk it earlier this year.

The meeting at the Department of National Defense (DND) headquarters in Camp Aguinaldo came two days after Foreign Affairs Secretary Teodoro Locsin Jr. announced that Duterte had decided to extend the life of the VFA after abrogating the key defense pact that governed the stay of US troops in the Philippines.

In a tweet, US Charge d’Affaires John Law, who met with Lorenzana, said the meeting focused on “robust and deep-rooted military cooperation.”

On Tuesday (Nov. 17), Lorenzana told reporters that among those discussed was the VFA.

Duterte scrapped the VFA in early 2020 after the US canceled the visa of Sen. Ronald dela Rosa, his former police chief. The VFA would have ended last August following Duterte’s decision but the President last June decided to suspend enforcement of his decision until end of 2020.

This meant the VFA would remain in effect until early 2021.

Alliance will stay the same

Lorenzana said US embassy officials also gave an assurance that there would be no change in US-Philippine defense alliance regardless of who the US President is.

The South China Sea or West Philippine Sea, a mutual concern of both countries, was also discussed in the meeting.

The US officials also offered military equipment. Lorenzana said precision-guided munition worth $18 million USD would be delivered next month, but he did not elaborate.