Duterte condoles with Bahrain for death of long-serving PM 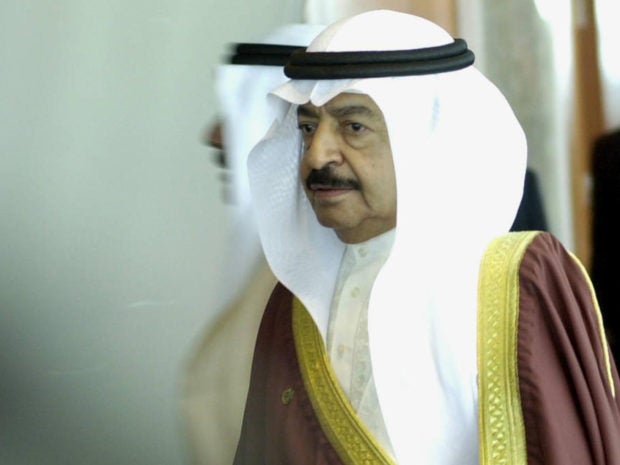 (FILES) In this file photo taken on October 16, 2003, Bahrain’s Prime Minister Khalifa bin Salman al-Khalifa arrives at the convention center to attend the opening session of the 10th summit of the Organisation of the Islamic Conference (OIC) in Malaysia’s administrative capital Putrajaya. – Bahrain’s Prince Khalifa bin Salman al-Khalifa, the world’s longest-serving prime minister who had held the post since independence in 1971, died on November 11, 2020, at the age of 84, state media announced. “The Royal Court mourns His Royal Highness… who passed away this morning at Mayo Clinic Hospital in the United States of America,” the Bahrain News Agency (BNA) said, adding that the country would enter a week of official mourning. (Photo by HASAN MROUE / AFP)

MANILA, Philippines — President Rodrigo Duterte has extended his condolences to Bahrain and members of the Royal family for the death of long-serving Prime Minister Sheikh Khalifa bin Salman al-Khalifa, who recently died at the age of 84.

In a statement dated Nov. 11, a copy of which was shared with the media on Friday, Malacañang said Khalifa was a “true friend of the Philippines and occupies a special place in the collective memory of the Filipino nation.”

“The Philippines joins Bahrain and the international community in mourning the demise of His Royal Highness Khalifa bin Salman Al Khalifa, Prime Minister of the Kingdom of Bahrain,” Malacañang said.

FEATURED STORIES
GLOBALNATION
PH Navy gets ‘eye in the sky’ from US: 8 drones worth P710M
GLOBALNATION
PH to get up to 50 million doses of COVID-19 vaccines from China’s Sinovac–Galvez
GLOBALNATION
US tech firm bares heavy presence of Chinese vessels near PH-occupied island

“President Duterte conveys deepest sympathies to His Majesty, King  Hamad bin Isa Al Khalifa and the members of the Royal Family and the Government of Bahrain in this time of great sadness and grief,” it added.

The Palace also noted the “development and rapid transformation” of the Bahraini nation for nearly five decades under Khalifa.

“Over the years, and especially during the administration of President Duterte, the Philippines and Bahrain have grown ever closer, with the Kingdom taking its place as one of the Philippines’ closest partners in the Middle East,” the Palace said.

Duterte visited Bahrain in 2017 during a series of state visits to the Middle East.

Read Next
Taiwan vows to give aid to typhoon-battered PH
EDITORS' PICK
PACC: ‘Less than 12’ congressmen linked to anomalies in DPWH
PH Navy gets ‘eye in the sky’ from US: 8 drones worth P710M
LIST: Where to get Easytrip, Autosweep RFID tags now
BOI calls for more manufacturing companies to repurpose facilities and help reshape COVID-19-stricken economy
Public warned against use of fake CopperMask
Experience clearer calls nationwide with Smart VoLTE
MOST READ
Ex-beauty queen Sandra Seifert posts photo of son with Cesar Montano
Amihan affecting Cagayan Valley, N. Luzon; new LPA likely to enter PAR on Sunday
Shake-up continues: Another Cayetano ally booted out from House post
LIST: Where to get Easytrip, Autosweep RFID tags now
Don't miss out on the latest news and information.