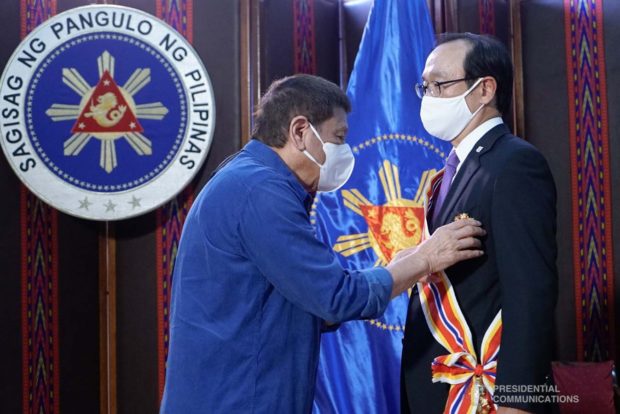 President Rodrigo Duterte confers the Order of Sikatuna with the rank of Datu to outgoing Ambassador of Japan to the Philippines Koji Haneda who paid a farewell call on the President on November 10, 2020. PRESIDENTIAL PHOTO

MANILA, Philippines — President Rodrigo Duterte on Tuesday conferred the Order of Sikatuna with the rank of Datu to outgoing Japanese Ambassador Koji Haneda.

Duterte thanked Haneda for his contributions in “strengthening and deepening the strategic partnership and overall bilateral relations between the Philippines and Japan,” a Palace statement on Wednesday said.

The President also thanked Haneda for Japan’s “generous and consistent” support to the Philippines’ fight against COVID-19 and for the Philippines’ inclusion in the clinical trials for the anti-COVID-19 drug Avigan.

Haneda, for this part, thanked the President for the honor of receiving the Order of Sikatuna and said he will “always be a true friend of the Philippines.”

Duterte has made four official visits to Japan since assuming office in 2016, while former Japanese Prime Minister Shinzo Abe visited the Philippines twice in 2017.

Japan is among the Duterte administration’s major partners in its “Build, Build, Build” program.

Apart from infrastructure, the Philippines and Japan also have enhanced ties in education, transportation, emergency assistance, trade and investments.