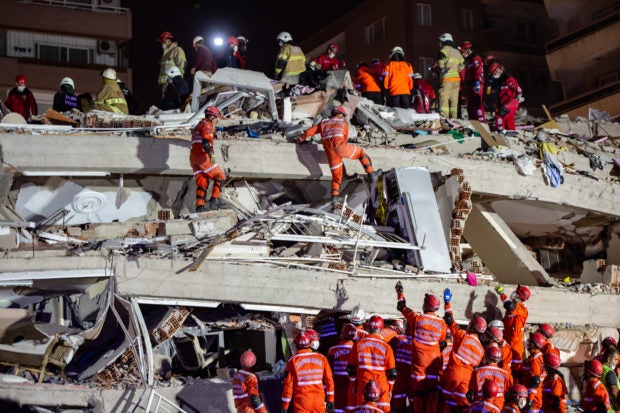 Volunteers search for survivors at a collapsed building after a powerful earthquake struck Turkey’s western coast and parts of Greece, in Izmir, on October 31, 2020. – A powerful earthquake hit Turkey and Greece on October 30, killing at least 22 people, levelling buildings and creating a sea surge that flooded streets near the Turkish resort city of Izmir. (Photo by Yasin AKGUL / AFP)

MANILA, Philippines — The Philippine ambassador to Turkey has reported that no Filipino fatalities were reported so far following the magnitude 7.0 earthquake that jolted Turkey and Greece.

“We (Embassy Team) are now in Izmir for a consular mission where a powerful earthquake struck the region,” Philippine Ambassador to Turkey Raul S. Hernandez said on Twitter Friday night.

“No deaths have been reported yet,” he added.

The team is in touch with Consul General Ender Yorgancilar and our Filcom leaders who have informed us that so far there are no Filipino casualties.
Let’s pray for the safety and welfare of our kababayans here and people of Izmir during this challenging times. pic.twitter.com/Zz6sb2FV2U

“The team is in touch with Consul General Ender Yorgancilar and our Filcom leaders who have informed us that so far there are no Filipino casualties.

“Let’s pray for the safety and welfare of our kababayans here and people of Izmir during this (sic) challenging times,” Hernandez said in a subsequent tweet.

A magnitude 7.0 tremor struck the Aegean Sea on Friday, and was felt in Turkey and Greece.

According to the U.S Geological Survey, the 7.0 magnitude tremor hit 14 kilometers off the Greek town of Karlovasi on Samos.

Initial reports read that buildings collapsed in the coastal province of Izmir as an aftermath of the earthquake.

Twenty-two deaths due to the earthquake have so far been reported.