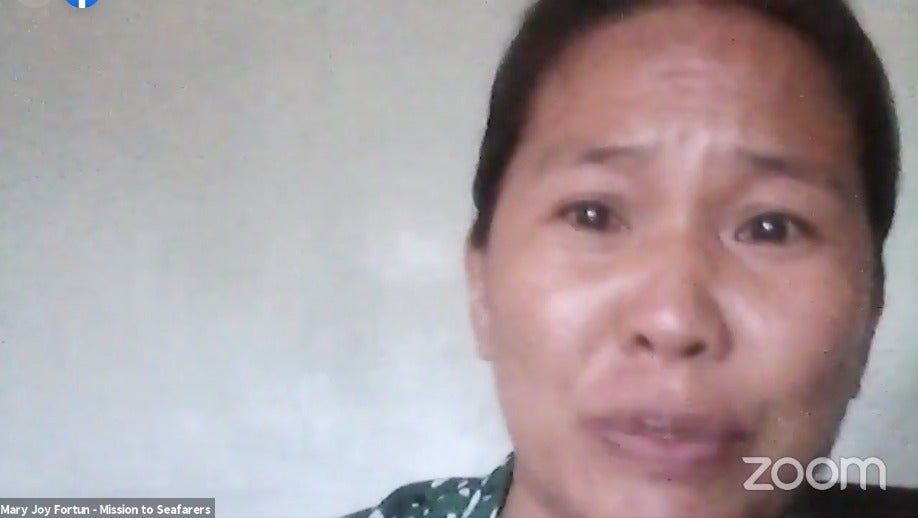 Mary Joy Fortun, wife of still missing seafarer Ronald Fortun, turns emotional as she appeals for the continued search and rescue operations for the crewmen. Screengrab from the House Zoom briefing

MANILA, Philippines — It has been nearly two months since cattle ship M/V Gulf Livestock-1 capsized off the waters of Japan, but the families of the missing Filipino seafarers who fell victim to the tragedy are still looking for answers.

Mary Joy Fortun, wife of still missing Ronald, turned emotional as she appealed for the continued search and rescue operations for the seafarers.

(I would like to appeal to this body to please help us, please pity us. We are asking the owner of the ship, through our government, that they help continue the search and rescue operations—be it surface rescue or island-to-island search rescue.)

Fortun said that while she is grateful for the efforts of the Japanese government in searching for the missing seafarers, she said that it is “not sufficient.”

Further, Fortun said she has written to the owner of the sunken ship for them to have their own search and rescue operations but these turned to be futile.

(Debris were seen in far-flung islands but they opted not to go. We cannot do anything but seek your help, honorable congressmen. Please help us.)

“Sumulat na kami sa may-ari ng Gulf Navigation na magkaroon sila ng search and rescue to support doon sa surface at doon sa island-to-island but they opted not to do it. We understand pero ang reason nila is—sa kanila, they are working with the Japan government. Pero sabi ng Japan, they (owners) are not connecting with them,” she added.

(We wrote to the owner of Gulf Navigation that they have their own search and rescue operation to support the surface and island-to-island search but they opted not to do it. Their reason is that they are working with the Japanese government. But the government said the owners are not connecting with them.)

On top of all these, Fortun said that the owners of the M/V Gulf Livestock-1  have also stopped giving the salary of her husband.

The vessel owned by Gulf Navigation Holding based in the United Arab Emirates capsized early September after it met with an engine problem as the Typhoon Maysak hit Southern Japan seas.

The ship was carrying 43 seafarers. Of the number, 39 are from the Philippines.

So far, only two of the Filipinos survived and one died while the rest are still missing up to this date.

According to Department of Foreign Affairs Undersecretary Sarah Lou Arriola, the Philippine Consulate in Osaka has been coordinating with the Japanese Coast Guard regarding updates on its search and rescue operations.

“The DFA also instructed our foreign embassies in Tokyo, Beijing, and Seoul to make representations with their host government towards further search and rescue for any surviving crew who may have drifted near or into their respective maritime territories,” Arriola said.

“As of the moment, the Japanese Coast Guard has not found any significant clue but continues to search for the missing crew…,” she added.

In the same hearing, Marino Rep. Macnell Lusotan moved that a resolution be filed urging the  DFA, the Overseas Workers Welfare Administration, and the Philippine Overseas Employment Administration, among others, to create task force for search and rescue operations of the missing Filipino crew.

The motion was approved.