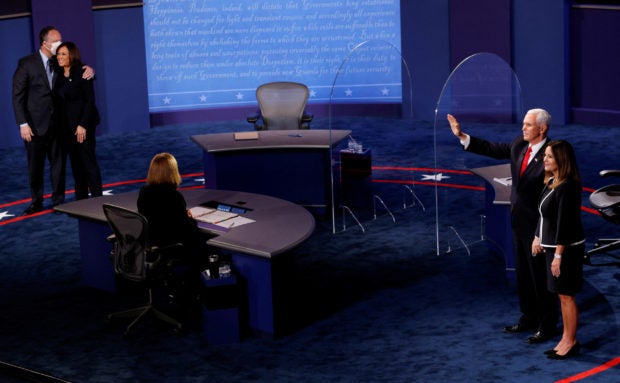 FACE-OFF Democratic vice presidential candidate Sen. Kamala Harris and her husband, Doug Emhoff, and US Vice President Mike Pence and his wife, Karen Pence, are seen on stage at the end of the vice presidential debate at the University of Utah, Salt Lake City, on Oct. 7. —REUTERS

MANILA, Philippines — On Oct. 7, a group of Filipino Americans was among the nearly 60 million people who watched the US vice presidential debate between Vice President Mike Pence and Sen. Kamala Harris.

Harris is the running mate of Democratic Party presidential candidate Joe Biden, while Pence is seeking reelection with US President Donald Trump under the Republican Party in the Nov. 3 polls.

In the case of Filipino Americans, this was a debate group watch among members of the Pilipino American Los Angeles Democrats (Palad), a political organization first chartered with the Los Angeles County Democratic Party in 1987.

Now considered the oldest Asian American and Pacific Islander Democratic club in the region, the group has a mission to organize and mobilize Filipino Americans in Los Angeles, California.

Due to the pandemic, the members watched the debate unfold in the confines of their homes — that is, via Zoom. And because they are Democrats, they are fully supporting Biden and Harris.

“We host events for our members and the larger Filipino and Asian American community because it raises our collective awareness of what’s at stake,’’ said Jaime Geaga, Palad vice president of communications, in holding the debate watch party.

The group has been “incredibly active the past year leading into the (US) primary and now general election,’’ according to Geaga.

“It is important for Filipino Americans to become more civically and politically engaged because who we vote for and who we elect matters,’’ he said.

And among the issues that Filipinos need to be aware of when they cast their votes is how “Filipino Americans have been disproportionately impacted in the health-care and hospital industry’’ as a result of the coronavirus pandemic, he said.

While Filipinos comprise 4 percent of nurses in the United States, they make up 32 percent of COVID-19-related deaths, Geaga said.

After watching the debate, he said his group stands with Harris, believing she is the “best person’’ to serve as vice president.

“She has demonstrated her leadership time and time again, including during the debate,’’ he said.

He added: “The Biden-Harris ticket is one that cares about people, the community and the nation as a whole regardless of who you are and and who you vote for. They have made it clear that they would be an administration that stood for all Americans.”

With Filipino lives among the over 200,000 lost in the United States because of COVID-19, Geaga said this would not have happened had the Trump administration implemented a “comprehensive national strategy for how to deal with the pandemic.’’

Asked whether Harris was able to convince undecided voters after the debate, he said the administration failed to lead the country in the fight against the coronavirus.

“We must listen to facts and science—this should not be a partisan issue when lives and livelihoods are at stake. I hope the contrast was clear to any undecided voters that there is only one choice for president and vice president and that’s Joe Biden and Kamala Harris,’’ Geaga said.

Unlike in the Philippines where the president and vice president are elected separately, Americans only elect a president.

Speaking before the Foreign Press Center Virtual Reporting Tour on the 2020 US elections—of which the Inquirer was a participant—Goldstein said vice presidential candidates could make a difference.

Goldstein said vice presidential candidates could be effective in articulating campaign themes, defending the ticket or attacking the other side in order to sway voters.

While he said that such a candidate could only affect a small percentage of voters, he pointed out that six of 15 presidential elections since 1960 were very close.

The latest debate was an “important moment for both Senator Harris and Vice President Pence to expose themselves and how they think and how they perform to the American people,” Goldstein said.

The data also showed that Filipino Americans in California, as a subgroup of the Asian American and Pacific Islander community, “identify more as Democrats than … Republican, 47 percent to 23 percent.”