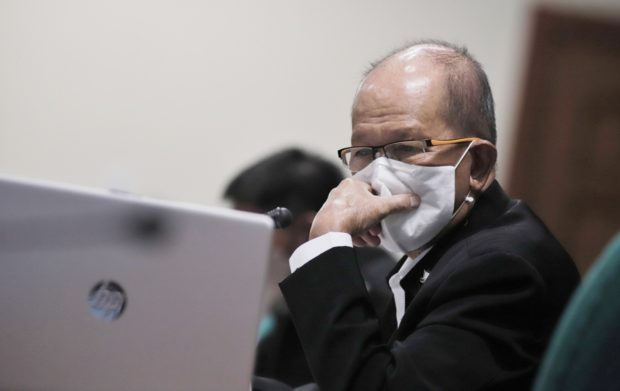 Defense Secretary Delfin Lorenza attends the hybrid hearing on the proposed P209 billion 2021 budget of the Department of National Defense and its attached agencies on Monday, October 12, 2020 (Joseph Vidal/Senate PRIB)

MANILA, Philippines — Defense Secretary Delfin Lorenzana on Monday described the situation in the West Philippine Sea as “stable and manageable,” which will enable the country’s defense sector to focus more on internal threats.

“The external threat is being managed by our foreign affairs [department]. The situation in the West Philippine Sea is stable at the moment and manageable,” Lorenzana said during the Senate hearing on the proposed budget of the Department of National Defense (DND) on Monday.

“As far as we are concerned, we can focus more our attention on the internal threats which are to contain the communist insurgency and the terrorists,” he added.

Lorenzana said this after he was asked by Senator Risa Hontiveros about what he considers as the biggest threats, whether external or internal, the country is currently facing.

“We have analyzed the threats to the country and the greatest threats that we see at the moment are one: the communist insurgency that is still going on all over the country. Number two is the terrorist threat, di pa rin natin na-address,” Lorenzana said.

While Hontiveros said she understands the “enumeration” made by the defense chief, the senator said she would have expected that the DND’s top priority would be to address external threats, specifically the maritime dispute between China and the Philippines.

The DND is proposing a P209.1-billion budget for 2021, an allocation Hontiveros noted is bigger than that of the Department of Health (DOH).

“In any case, our defense establishment and the budget it’s requesting has to be tailored towards the threats the country is  expecting to face,” she added.