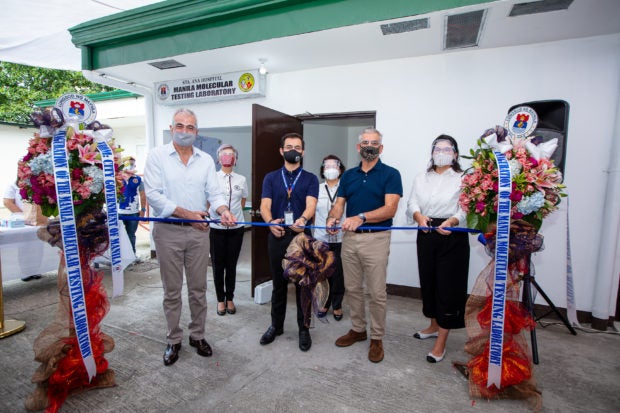 The City of Manila has partnered with the Ayala Group of Companies in the construction of a new molecular laboratory inside Sta. Ana Hospital.

Spearheaded by Manila Mayor Francisco “Isko Moreno” Domagoso, the Manila Molecular Testing Laboratory at Sta. Ana Hospital will support the city’s ongoing efforts against the pandemic by increasing its testing capacity. Free serology testing is now being offered in its various barangays to serve the community, especially workers who are required to pass through required health protocols.

“The construction of this laboratory is significant for us. The City of Manila has been providing free serology testing, and as we speak, more than 67,000 individuals have already benefitted from it – individuals and corporations, because I want us to go back to normal. Normal in such a way that we can live with COVID-19, accept the fact that there is danger so that we have to discipline ourselves, but we can go back to work safely,” Mayor Isko Moreno said.

The collaboration reflects the continuing commitment of the Ayala Group to support government initiatives in the fight against COVID-19. Ayala Corp. President Fernando Zobel de Ayala believes in the positive impact of public-private collaborations in addressing the current crisis.

“We support the national government’s efforts to upgrade our testing, tracing, and treatment capabilities. While we are doing what we can to help at the national level, we also believe that engaging local governments and applying decisive leadership at the grassroots level are critical to our success. The construction of this bio-molecular laboratory is an important example of our commitment to help in the fight against COVID-19. We hope that this facility will be a significant help in strengthening the health systems of Manila,” Zobel de Ayala said.

According to Dr. Grace Padilla, Director of the Sta. Ana Hospital, the hospital is the only local government unit district hospital to house two types of molecular laboratories. One is the Xpress Xpert SARs COV2 Testing Laboratory using cartridges and the other is the RT-PCR molecular laboratory.

“We can perform more or less a thousand tests a day for one machine and now we have two Sansure machines. Kung ma-maximize natin ‘yung capacity, puwede tayong tumulong even sa national government. We’ll be doing our best to make it efficient, fast, reliable and real time. The new molecular lab will really strengthen our testing capacity and our fight against COVID 19,” Padilla shared.

Ayala Foundation Inc. and Ayala Land’s construction arm, Makati Development Corporation (MDC) led the specialized construction of the molecular laboratory to prepare for the installation of new equipment which the City of Manila has procured for the district hospital.

MDC has been instrumental in the transformation of a number of buildings into COVID-19 facilities since March 2020. MDC has so far built eight COVID-19 facilities in the country including the Sta. Ana laboratory. These include converting the World Trade Center into a 500-bed quarantine center and the Philippine Red Cross headquarters into COVID-19 bio-molecular laboratory. It has also built AC Health and Qualimed testing laboratories such as the Qualimed Nuvali Triage facility in Sta. Rosa, Laguna.

Prior to the pandemic, the Ayala group of companies has already been supportive of the further development of the City of Manila through various programs for its constituents. These programs include <code/it>, an educational technology program that trains public elementary school students and teachers in the use of technology to prepare them for more advanced workplaces; and Sari-Saring Aralan, which uses the sari-sari store as a hub for learning for out-of-school youth in Tondo.

The Ayala Foundation’s CENTEX Program has also been in place in Manila since 1998 and continues to provide holistic and quality education for students in the CENTEX School.

Previously, the group helped oversee the construction of a rest room at the Kartilya ng Katipunan monument, after the important landmark drew national attention for being filled with human waste during an inspection led by Mayor Isko during the first few weeks of his term.

Last June, Globe Telecom Inc. started giving public school students in the city free access to online learning platforms through its BatangMaynila Surf Plans, which are specially customized to serve the needs of students for their online school activities. At the same time, Globe donated 11,000 LTE pocket mobile WiFi devices to the city’s public school teachers to assist them in the Department of Education’s blended learning programs.
Other companies under the Ayala group have also poured in their support for the Sta. Ana Hospital and the Manila Molecular Testing Laboratory.

Globe Telecom’s GoWiFi team deployed WiFi services at the Sta. Ana Hospital so healthcare workers, patients, and visitors can easily connect with loved ones through the internet.
Manila Water Company Inc. continues to provide round-the-clock water supply to the Sta. Ana and San Andres districts, which forms part of the Manila side of its concession. The company is also assisting in the declogging of Sta. Ana Hospital’s internal sewer pipe.

The partnership with the City of Manila marks the Ayala Group’s continuing efforts to help various communities mitigate the impacts of the pandemic. The group is an active participant in Task Force T3, which stands for Test, Trace, and Treat, convened by the Inter-Agency Task Force–National Task Force (IATF-NTF) and the Department of Health (DOH).

As of September 15, the Ayala Group has allotted more than PHP 10.2 billion for COVID-19 related initiatives.