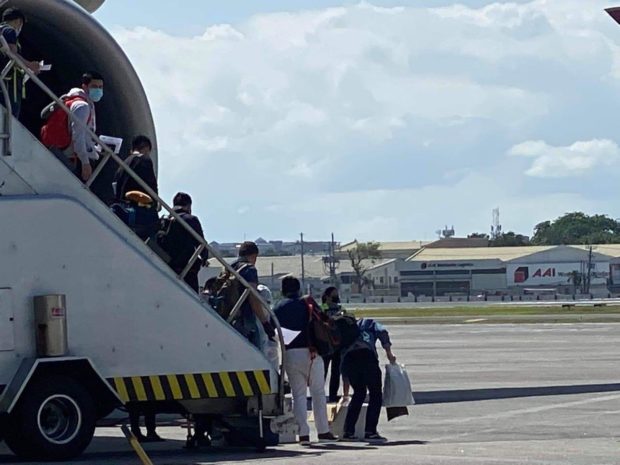 MANILA, Philippines — Sixteen Filipino seafarers, who have been stranded in China for months, are scheduled to return home  on Tuesday, the Department of Foreign Affairs (DFA) said.

Three land-based overseas Filipino workers (OFWs) will also join the repatriation. The DFA, in a statement on Monday, said the Filipinos will arrive in Manila at around 1 a.m.

According to the DFA, 11 of the 16 returning Filipino seafarers are from Ocean Star 86. They have been stranded in Dongshan, China since March this year,

Meanwhile, the other five seafarers on board M/V Maria P. have been stranded in the coastal city of Ningde since July 2020.

“Both are Chinese fishing vessels which were affected by China’s ‘no disembarkation’ policy as precautionary measure due to the pandemic and the unavailability of commercial flights,” the DFA said.

Through the Philippine Consulate General in Xiamen, the DFA said it has been monitoring the condition of the seafarers since they were stranded.

“The Consulate has been providing them welfare assistance and ensured that their salaries and other entitlements are provided for by their employer,” it added.

Read Next
Carpio: Will Duterte walk the talk on PH arbitral win vs China?
EDITORS' PICK
LTO’s P500-M deal for screws draws scrutiny
Smart reinforces superiority with best speed and mobile video experience in PH
Every Filipino home can now be a smart home with realme TechLife
Nestlé Philippines’ ‘NESCAFÉ Plan’ bags Grand Anvil at PRSP 56th Anvil Awards
New 3,045 COVID-19 cases push PH total active cases to 40,074
How to lose a PH genius: Wesley So officially a US citizen
MOST READ
US lays out list of aid to ‘satisfy’ Duterte following VFA payment demand
Robredo on Sara Duterte leading poll surveys: Why are Filipinos drawn to leadership of this kind?
How to lose a Filipino genius: Wesley So officially a US citizen
Lawyer for red-tagged tribal folk stabbed; laptop, documents taken
Don't miss out on the latest news and information.