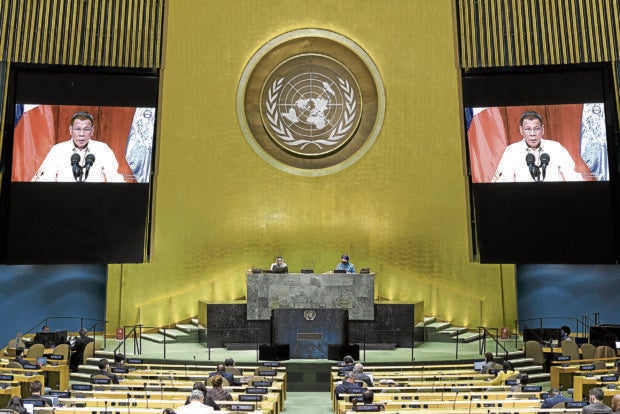 VIRTUAL MEETING OF WORLD LEADERS In this photo provided by the United Nations, a prerecorded speech by President Duterte is played during the 75th session of the UN General Assembly at the world body’s headquarters in New York on Tuesday (Wednesday in Manila). World leaders kept at home by the coronavirus pandemic addressed the United Nations’ first virtual meeting through teleconferencing. —UN/AP

MANILA, Philippines — Former Foreign Secretary Albert del Rosario on Wednesday said the government should “put into reality” President Rodrigo Duterte’s assertion in the United Nations that the Philippines will not compromise its arbitral victory over China in the maritime dispute between the two countries in the heavily contested South China Sea.

Del Rosario said he was “heartened” to know that Duterte “is not at all impervious but listens to the will of his countrymen” by invoking the July 12, 2016, ruling of the Permanent Court of Arbitration in The Hague in favor of the Philippines in his address to the 75th session of the UN General Assembly earlier on Wednesday.

“By invoking the arbitral award, the President has acted more faithfully to our Constitution, which mandates him and our military to secure our country’s sovereignty and protect our lands and seas,” Del Rosario said in a statement.

“The next step is for our President and his administration to put in reality the invocation of the arbitral award: our government should work earnestly to get the support of more countries so that the arbitral award will be raised more emphatically next year, for the [UN General Assembly] 2021,” he said.

Addressing the online session of the world body, Mr. Duterte asserted the Philippines’ arbitral victory and expressed appreciation for other countries’ support for the ruling of the court that China’s sweeping claim had no basis in international law, and that China had violated the Philippines’ sovereign rights to fish and explore resources in the West Philippine Sea, waters within the country’s 370-kilometer exclusive economic zone in the South China Sea.

“The award is now part of international law, beyond compromise and beyond the reach of passing governments to dilute, diminish or abandon,” Duterte said.

“We firmly reject attempts to undermine it,” he said.

He hailed the international support for the award.

“We welcome the increasing number of states that have come in support of the award and what it stands for—the triumph of reason over rashness, of law over disorder, of amity over ambition. This—as it should—is the majesty of the law,” Duterte said.

The President’s statements to the assembly attended by China came amid criticism that he was sitting on the arbitral award to improve ties with Beijing, which has rejected the ruling and built artificial islands on reefs claimed by Manila in the South China Sea.

Shortly after coming to office in 2016, Duterte said he would set aside the ruling because of the prevailing political situation.

In his address to a joint session of Congress in July, the President said he was “inutile” because China had possession of Philippine-claimed islets in the South China Sea.

He said he brought up the arbitral ruling with China in 2019, stating that it was final, binding and not subject to appeal, but Chinese President Xi Jinping refused to recognize the award.

Despite those statements, Duterte’s assertion of the arbitral ruling in the UN General Assembly has been his “consistent position all along,” his spokesperson, Harry Roque, said in a television interview on Wednesday.

“Perhaps if he had delivered his speech in the UN General Assembly earlier, then he would have said the same thing,” Roque said.

Asked how the Philippines would make sure its legal victory over China is not undermined, Roque said the President’s speech in the UN General Assembly was one course of action, as Mr. Duterte asked the international community to recognize the validity of the ruling.

“We can only rely on multilateralism right now. I don’t think we can even rely on unilateral use of force. Not only is it prohibited under international law, but we also have limited means by way of that option and that has been stated by the President time and again,” Roque said.

He said the Philippines would maintain its ties with China despite the maritime dispute between the two countries.

Roque added that he did not see the dispute being resolved soon.

Former Supreme Court Senior Justice Antonio Carpio, a member of the Philippine legal team that argued the country’s case before the Hague tribunal, commended the “strong stand” Mr. Duterte made in the United Nations.

He said he hoped the Duterte administration would implement the policy statement on all fronts and gather international support to enforce the award.

“[Slave] no more!,” Sen. Panfilo Lacson tweeted. “Hearing the President invoke the award [in] the UN General Assembly while firmly rejecting any attempt to undermine it should now erase doubts on where he stands regarding the [West Philippine Sea] issue.”

“He never was,” Foreign Secretary Teodoro Locsin Jr. tweeted back. “He was [slave] to the reality he inherited: a China already in possession of our reef (Panatag Shoal) thanks to Obama giving it to China when our navy and the China navy had a standoff and the [United States] told both to stand down and leave. We left, China stayed and reclaimed it.”

It was China’s seizure of Panatag Shoal in 2012 that forced the administration of then-President Benigno Aquino III to challenge China’s claim to almost the whole South China Sea in the Hague court.

Even Sen. Francis Pangilinan, a member of the opposition to  Duterte in the Senate, welcomed the President’s surprising turnaround from his previous remarks in public that critics had seen as a sellout to China.

“We hope he will match these strong words with actions to include bringing the matter officially [to the United Nations],” Pangilinan said.

Senate President Pro Tempore Ralph Recto said he found the President’s prerecorded speech well written and praiseworthy and that he believed it could have won an Emmy award.

“From where he spoke, with the whole world watching, he was able to plant our flag on a territory that historically and legally is ours,” Recto said.

Muntinlupa Rep. Ruffy Biazon, vice chair of the national defense and security panel of the House of Representatives, applauded the stand the President made in the United Nations.

“This shows the Philippines can stand up against the intrusions and assertions by China in the South China Sea without resorting to war,” Biazon said.