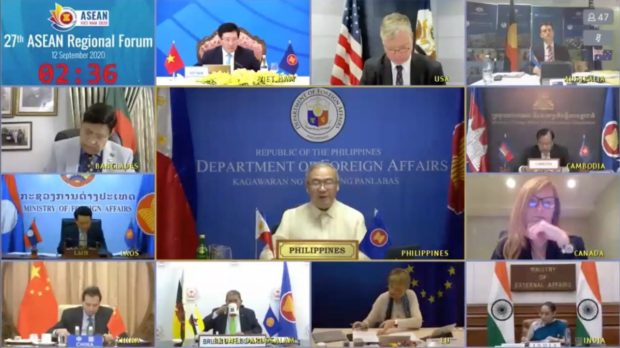 MANILA, Philippines —  The Philippines will “push as hard as it can” for the completion of negotiations on the South China Sea code of conduct (COC), an accord that seeks to prevent the escalation of tensions in the disputed waterway, Foreign Affairs Secretary Teodoro Locsin Jr. said on Wednesday.

Speaking at the Association of Southeast Asian Nations (Asean) Regional Forum last Sept. 12, Locsin expressed the hope for a “substantial headway” on the second reading of the negotiating draft of the COC, the Department of Foreign Affairs said in a statement.

As the country coordinator for Asean-China dialogues, Manila’s top diplomat said the Philippines would “push as hard as it can for the conclusion of an effective and substantive Code of Conduct in the South China Sea.”

China and countries that have conflicting territorial claims over the South China Sea, including ASEAN members Philippines, Vietnam, Malaysia, and Brunei, have been negotiating for a COC.

China has been pushing for its expansive claims in the South China Sea, refusing to recognize the 2016 ruling by the Permanent Court of Arbitration (PCA) that invalidated its ambitious nine-dash line that claims virtually the entire body of water.

During the forum, Locsin also urged his ASEAN counterparts to remain steadfast in efforts to counter terrorism.

He also expressed gratitude for the expressions of support for the Philippines in the wake the bombings that rocked Jolo in August.

“I remind colleagues that this kind of terrorism threatens everyone in the Association. It will be tempting to pass on the threat; but its very exportability makes this terrorism as easily importable as happened in Marawi,” Locsin said.

“Nor is one country turning its back on another’s terrorist problem an option. As terrorism grows in one, the threat of it increases in others,” he added.

While the world deals with the coronavirus pandemic, Locsin stressed that states could not afford to ignore political and security issues of common concern, including counter-terrorism.

Further, he thanked allies, like the United States and Australia, “for helping retake Marawi.”

He also called for continued regional cooperation even as the Philippines continued to strive to improve its own defense capabilities to combat terrorism.