Carpio to serve as counsel in Del Rosario, Morales’ ICC complaint vs China 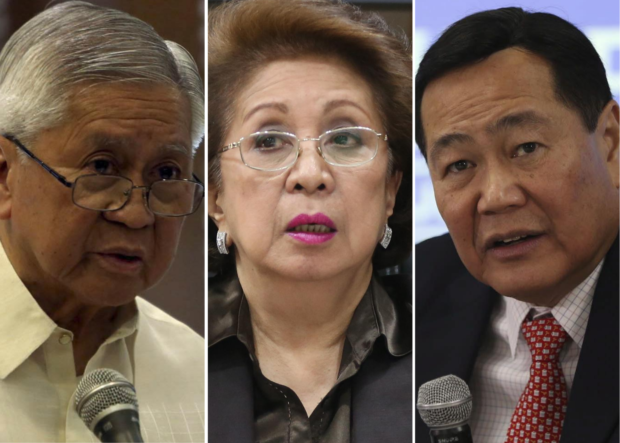 “I am happy to announce that Justice Tony Carpio agreed to act as our counsel in this ICC case. Justice Carpio’s unparalleled wisdom and expertise in the South China Sea issue have raised our confidence in the case and will surely bolster our chances in the ICC,” del Rosario said at an online forum hosted by ADR Stratbase Institute and the Bower Group Asia on Tuesday (Sept. 16).

Additional information will be submitted to the ICC within the week, he said.

Senior officials of China Communications Construction Corp., which played a role in China’s artificial island-building in the South China Sea will also be included as respondents in the new submission to the ICC, he added.

Del Rosario and Morales filed the communication in March 2019, with Chinese President Xi Jinping and other officials as respondents for the alleged “crimes against humanity” committed against Filipinos in the West Philippine Sea.

The two former government officials accused China of depriving thousands of Filipino fishermen of accessing its own resources and engaging in massive land reclamation activities that resulted in devastating environmental damage in the West Philippine Sea.

The ICC dismissed the complaint in December, saying that it has no territorial or personal jurisdiction over the case.

But Del Rosario said he believes that the ICC has “a strong basis to proceed with our case.”

“The end purpose of our ICC case is to hold President Xi Jinping and other Chinese officials criminally liable and be penalized by imprisonment pursuant to the ICC statute,” he said.

“We urge our neighbors in the South China Sea who are also aggrieved by China’s actions to submit similar communications with the ICC to make Chinese officials accountable for their atrocities,” he said.

“If our case progresses, warrants of arrest may be issued against the individuals we identified as responsible,” Del Rosario said.

“This effectively prevents persons like Xi Jinping and Wang Yi from traveling to ICC state parties like a number of European countries, Australia, Japan, and the Republic of Korea because such countries will be obligated by the ICC statute to enforce the arrest warrants against them,“ he said.