Amid Chinese presence, Navy wants to stay in Sangley Point 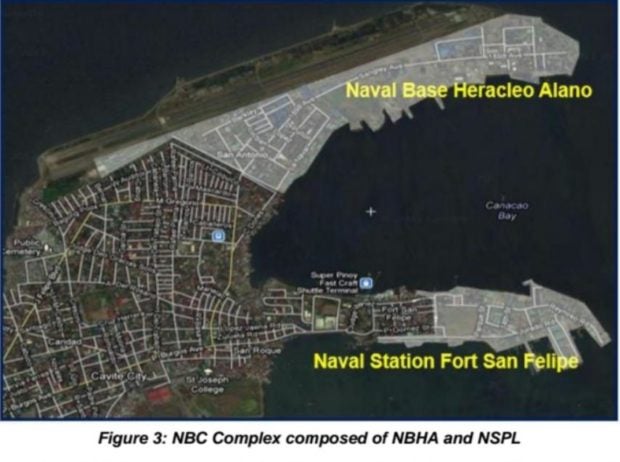 ‘WE WANT TO STAY THERE’ Map shows facilities of the Philippine Navy surrounding Cañacao Bay at Sangley Point in Cavite City. The Navy is opposed to a plan to reclaim much of the bay and says it prefers to stay there, amid Chinese business interests that have been linked to China’s expansion in the disputed South China Sea. —PHOTO COURTESY OF THE PHILIPPINE NAVY

MANILA, Philippines — The Philippine Navy is opposing a plan by the Cavite provincial government to boot the military service command out of Sangley Point in Cavite as part of a P500-billion airport project that is expected to ease congestion at Ninoy Aquino International Airport (Naia) in neighboring Manila.

Vice Adm. Giovanni Carlo Bacordo, the Navy’s flag officer in command, cited particularly the involvement in the project of China Communications Construction Co. Inc. (CCCC), one of the Chinese companies recently banned by the United States for its alleged role in the illegal construction of artificial islands on maritime features in the South China Sea, including the West Philippine Sea within the Philippines’ exclusive economic zone.

Bacordo said the reported role of CCCC in the militarization of the South China Sea had raised eyebrows among retired and active security officials over the SPIA project. They want to keep the Navy’s presence at the strategically located Sangley Point, a former US naval base, he said.

“All the more we want to remain there so to ensure that there are no security violations,” he told Inquirer.net over the weekend.

Sangley’s location also allows the Navy, the military’s naval warfare service branch, to conduct surveillance operations and use it as a staging point.

But while the Navy is firmly against the plan to be evicted out of Sangley, Bacordo clarified that it was not against the SPIA project itself.

“The project can go on.… We can coexist in Sangley without necessarily booting us out,” he said.

He declined to comment on the Philippine government’s deals with Chinese firms for its flagship infrastructure projects, saying it was “beyond the purview” of the Navy.

In February, Duterte inaugurated Sangley airport, which boasts of a 2.4-kilometer runway that would be used for general aviation and turboprop cargo operations.

Construction of new facilities, such as a passenger terminal building, hangars and drainage system, started in late 2018.

In June 2019, the President ordered the immediate transfer of domestic flight operations to Sangley Point after a lightning storm delayed and diverted domestic and international flights of thousands of passengers in Naia.

In October last year, the airport started its operational dry run and had its maiden cargo flight.

The CCCC’s spotty record has also raised questions about the propriety of allowing its participation in the major infrastructure plan. The World Bank had previously banned the CCCC and its subsidiaries due to fraudulent practices, according to several reports.

Citing sources involved in the bidding of the SPIA project, the Inquirer reported in January that the bidding process had favored CCCC from the very start, but Malacañang and the Cavite government played down the allegations.

Immediately after the recent US announcement on its trade blacklist of Chinese companies linked to China’s island-building in the South China Sea, Foreign Secretary Teodoro Locsin Jr. said he would recommend the termination of government contracts with these firms but later backpedaled after the President decided to push through with the infrastructure projects.

The Navy is also concerned about the SPIA plan to reclaim almost 75 percent of Cañacao Bay, the site of the Battle of Manila Bay during the Spanish-American war.

The Cavite provincial government said it would pursue a proposal to transform the gateway into a $10-billion international air hub. This will include a massive land reclamation component and will be partly funded by Chinese companies.

Because of its historical importance, he said the bay “should be dredged and preserved in its entire glory” instead of reclaiming it.

“During the time of the Americans, large ships can enter and dock there,” he said.

The Philippine Navy’s vital facilities — the Philippine Fleet, Naval Sea Systems Command and the Naval Installation Command — are all stationed at Sangley Point. Some Navy personnel and their families also live in a community nearby.

Based on the initial development plan released by the Cavite government, the Philippine Navy is completely out of the picture.

“If you look at the plan for SPIA, they will cover the whole of Sangley, plus they will reclaim about three-fourths of Cañacao Bay,” he said.

He added: “We are really not there from their perspective.”

In December last year, Cavite Gov. Jonvic Remulla said he would propose that the Philippine Air Force “co-use” the SPIA to ease security fears. He made no mention of the Philippine Navy.

Bacordo said the Navy had submitted a position paper to the Armed Forces of the Philippines and the Department of National Defense in March to formalize its stand on the SPIA project.

“The AFP chief of staff favorably endorsed the paper to the SND (secretary of national defense) and the SND agrees with the position of the AFP,” he said.

An initial online discussion between the Navy and the provincial government took place in August, but the issues have not yet been fully resolved.

“Before this COVID-19 pandemic, we were supposed to sit down, but it never happened… I’m looking forward to fruitful discussions that started in August,” the Navy chief said.

He reiterated that the command was not against the SPIA project. “We just want a win-win solution. Leave something for us for the Navy,” he said.

—With a report from Inquirer Research

KC Concepcion gets greeting from Shakira — thanks to apl.de.ap