Filipino missing, another compatriot injured in fire on oil tanker near Sri Lanka 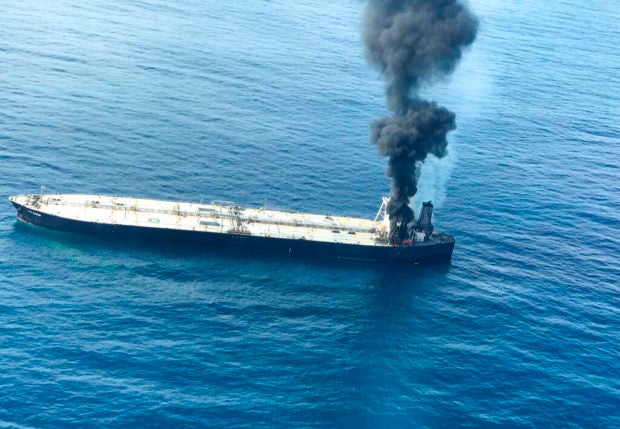 COLOMBO, Sri Lanka — A fire broke out on a large oil tanker off the eastern coast of Sri Lanka on Thursday, leaving one of its 23 crew members missing and another injured, a navy spokesman said. Both were identified as Filipinos.

The fire started in a boiler in the engine room and then spread in the MT New Diamond, which was carrying 270,000 metric tons of crude oil from the port of Mina Al Ahmadi in Kuwait to the Indian port of Paradip, spokesman Capt. Indika Silva said.

The navy sent four ships to help the ship. By the time they arrived, 19 of the crew members had left on lifeboats and were picked up by the ships, Silva said.

As the navy ships tried to put out the fire, the captain and two others abandoned the tanker, he said. The remaining crew member, a Filipino, was missing. The crew was comprised of 18 Philippines and five Greek citizens.

The injured crew member was identified as the third engineer of the ship and a Filipino. He was taken in a navy boat to land and was hospitalized, Silva said.

Photos released by the Sri Lankan air force showed smoke rising from the engine room of the ship but no visible damage or fire in other areas of the vessel.

He said two anti-submarine Russian ships anchored at a Sri Lankan port were also heading to the scene. The Russian ships had arrived at Hambantota port for replenishment and crew rest.

The Indian coast guard said it also deployed ships and aircraft after the Sri Lankan navy sought its help.

At the time the fire broke out, the Panamanian-registered ship was about 38 nautical miles (70 kilometers) east of Sri Lanka.