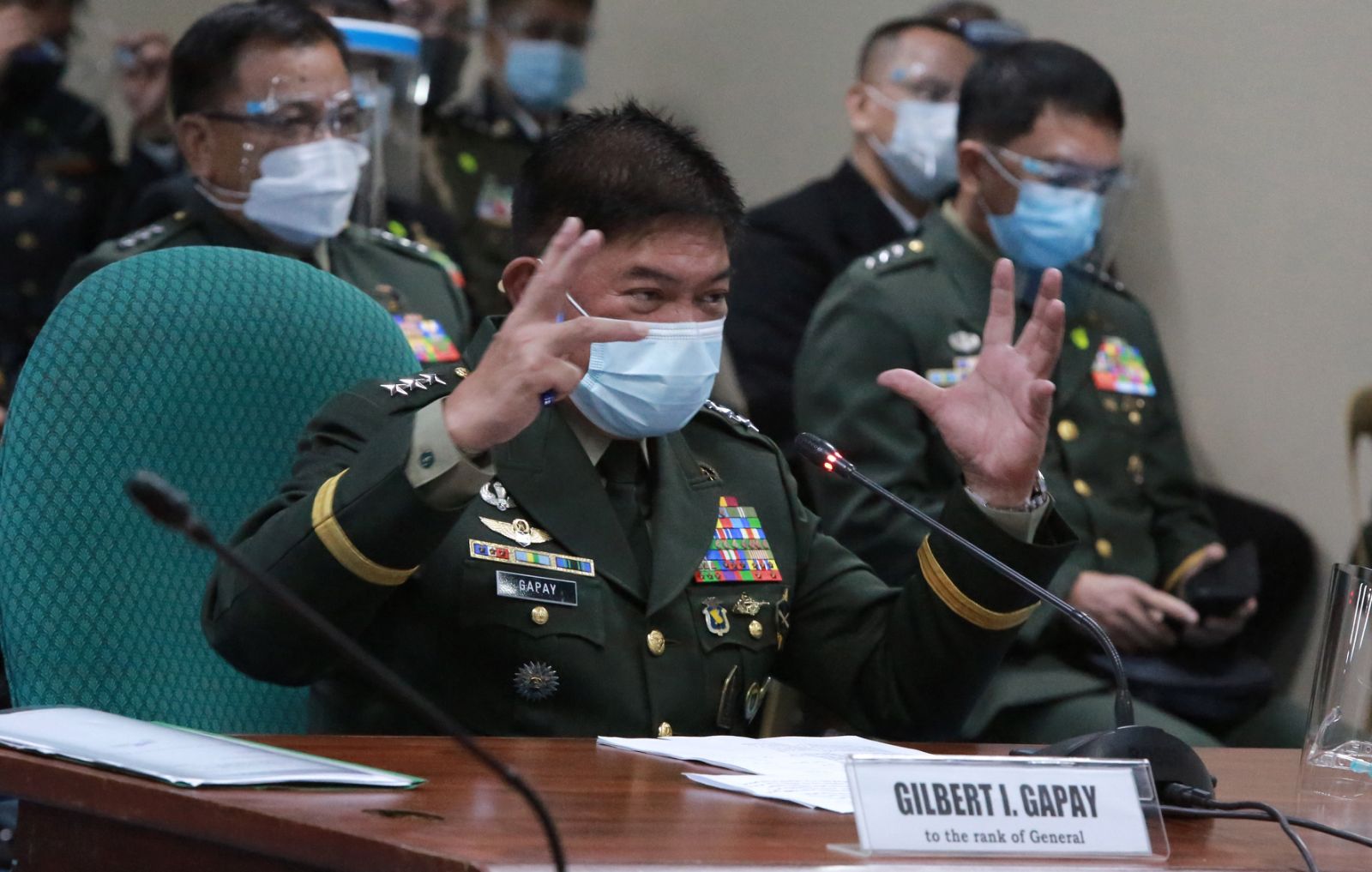 Armed Forces of the Philippines (AFP) Chief of Staff Gen. Gilbert Gapay during a confirmation hearing by a panel of the Commission on Appointments on Wednesday, September 2, 2020. (Alex NuevaEspaña/Senate PRIB)

MANILA, Philippines — The government’s “soft approach” in dealing with issues concerning the South China Sea does not mean the Philippines is “abandoning” its territorial claims in the area, the country’s top military official said.

Facing a panel of the Commission on Appointment (CA) on Wednesday, Armed Forces of the Philippines (AFP) chief of staff Gen. Gilbert Gapay said the country continues to uphold its claim in the highly-contested waterway.

“While we are strictly adhering to diplomatic, peaceful, and rules-based approach in dealing with issues in the South China Sea, this soft approach does mean we are abandoning our claim in that area,” Gapay told lawmakers.

“We still uphold them,” he added.

The country’s military presence in the area proves that it is upholding its sovereignty in the West Philippine Sea, according to the AFP chief.

“[It’s] testimony that we are upholding sovereignty and we are asserting ownership, sovereignty in that territory,” he said.

Gapay said the Philippine military continues to deploy its naval forces in the South China Sea, particularly in the country’s territorial waters.

“We have forces deployed there and they are patrolling our territorial waters frequently and regularly,” he said.

Earlier, China urged the Philippines to stop its “illegal provocations” as it accused Manila of supposedly violating Beijing’s security and sovereignty for dispatching military aircraft near the Spratly Islands.

But Foreign Affairs Secretary Teodoro Locsin Jr. has already said the Philippines will not cease patrol operations near Spratlys.

China has long been pushing for its expansive claims in the South China Sea, refusing to recognize the 2016 ruling by the Permanent Court of Arbitration (PCA) which ruled in favor of the Philippines and invalidated Beijing’s ambitious nine-dash line feature.

China’s reclamation activities and militarization in the heavily contested waterway have also raised concerns about the peace and stability in the area.

According to Gapay, the AFP has satellite footage proving the existence of China’s military facilities in the disputed region.

“There’s a runway there, we have also monitored some military aircraft landing there, warships docking there. There is indeed military activity in the area,” he said.

Gapay added that the government continues to address China’s aggression in a diplomatic manner.

The Philippine military is also in constant coordination with its Southeast Asian counterparts “through a multilateral action in protesting this aggressiveness of China in the area,” according to AFP chief.

“We have been following this diplomatic track but we are backing this up by maintaining naval presence in the area, particularly in our territorial waters,” he added.