Hontiveros to Duterte: Speak out, lay down plan to protect PH from China’s ‘adventurism’ 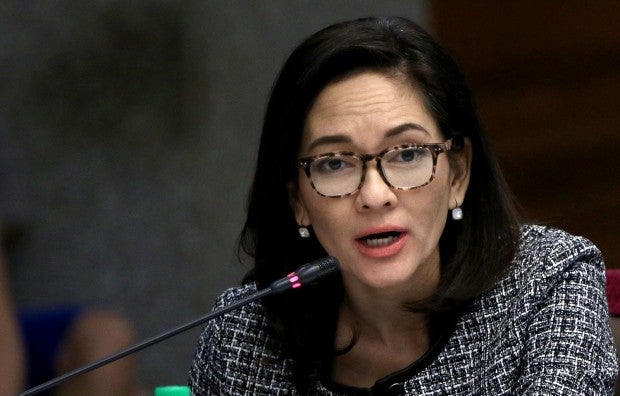 MANILA, Philippines — Senator Risa Hontiveros has urged President Rodrigo Duterte to “speak out” and lay down the government’s plan in protecting the country’s territories from Chinese aggression.

Hontiveros issued the call after a top military official stressed the need for “political will” in defending the Philippines’ sovereignty over the West Philippine Sea.

“We must come up with a strategic framework to address China’s continued aggression in the West Philippine Sea,” Hontiveros said in a statement on Tuesday.

“The President himself must speak out and lay down the government’s plan in protecting our territories and exclusive economic zones from China’s adventurism,” she added, saying that “political will” against Chinese incursions should come “from the very top.”

“I sympathize with our government and military officials who are looking to the top for leadership, policy, and conduct to address China’s continued violations of our sovereignty,” the senator said.

“We can no longer be reactive. We need to be proactive in defending our territory. Hindi tayo inutil [We are not useless],” she added.

In July 2016, the Permanent Court of Arbitration in The Hague ruled as invalid Beijing’s claim over vast portions of the South China Sea, including part of the West Philippine Sea.

China, however, refused to recognize the ruling, continuing its aggression in the disputed waters and building artificial islands to house military facilities.

“Since the Permanent Court of Arbitration in The Hague’s ruling in our favor back in 2016, the Executive has failed to craft and implement a clear diplomatic and military strategic framework to assert our exclusive sovereign rights over the West Philippine Sea in the face of continued disrespect by China,” Hontiveros went on.

“The protection of our natural resources and our fisherfolks must be a priority for the government. Our fisherfolks’ livelihood and safety are being threatened. We are also losing at least 33 billion pesos yearly due to China’s damage to our reef ecosystems,” she added.

The senator had previously called on the government to demand from China at least P200 billion in reparation for the damage incurred to Philippine reef ecosystems.

She said that the money can be used to fund the country’s pandemic response.