President Aquino’s Spratlys plan on hold until next year 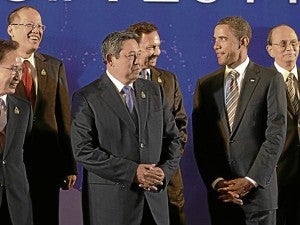 BALI, Indonesia—Having gotten nowhere with its proposal here, the Philippines is now looking to next year’s summit of the Association of the Southeast Asian Nations (Asean) to push for its initiative to ease the tensions in the Spratly Islands in the West Philippine Sea (South China Sea).

The Philippines on Saturday made a last pitch for its proposal to turn the West Philippine Sea into a zone of peace, freedom, friendship and cooperation (ZoPFFC) at the East Asia Summit of 18 Asia-Pacific nations—but with little luck.

President Aquino joined 17 other leaders from the 10-nation Asean and its dialogue partners, including US President Barack Obama and China Prime Minister Wen Jiabao, in the widened summit that was dominated by discussions about regional maritime security, before flying back to Manila on Saturday night.

“ZoPFFC was not brought up at all. We’re the only one who brought up the ZoPFFC. All the interventions were on maritime security in the West Philippine Sea,” Foreign Secretary Albert del Rosario told reporters after the closing ceremonies.

The Philippine initiative that entails segregating disputed areas in the Spratlys from the undisputed ones to allow free use and joint development of the undisputed regions received a lukewarm response from other Asean members.

Indonesian President Susilo Bambang Yudhoyono, the Asean chair and summit host, said he had taken note of the ZoPFFC which the Philippines insisted was an “actionable framework” to resolve the dispute over the strategic and potentially oil- and gas-rich Spratlys involving some of the bloc’s members.

The Philippines said it would seek a peaceful resolution of the dispute with China and the other claimants—Malaysia, Vietnam, Brunei and Taiwan—for which it had obtained support from the United States.

China maintained that the summit was not the proper forum to tackle the issue, Del Rosario reported.

“They just said essentially that it should be addressed in a peaceful way. They should be addressed in accordance with the rule of law, including the Unclos (United Nations Convention on the Law of the Sea), and then it should be done multilaterally. Some said it should be done multilaterally, including the claimants, and some added the DOC (Declaration on the Conduct of Parties in the South China Sea),” he said of the reaction from other leaders whose countries he could not recall.

“Obama had expressed the same thing,” he added, meaning the peaceful resolution of the dispute in accordance with international law, such as Unclos.

Wen reiterated Chinese officials’ earlier misgivings about discussing the issue at the East Asia Summit, the widened summit which also takes in Australia, China, India, Japan, South Korea, New Zealand the United States, and this year’s new member Russia. But he did not say which was the proper forum.

Del Rosario said Malaysia was for the peaceful settlement of the Spratlys dispute, which has become a flash point for conflict and an irritant between China and the other claimant-countries.

He said the summit was dominated by regional maritime security discussions, but also tackled interventions on disaster management, connectivity and food security.

“That remains to be seen,” Del Rosario said when asked if Cambodia, which hosts the Asean summit next year, should be a concern for the Philippines insofar as its initiative is concerned.

In Manila last Friday, Del Rosario had said the Philippines would also seek a peaceful resolution of the dispute with the United Nations, a message he said he relayed during a meeting with UN Secretary General Ban Ki-moon on Saturday.

“I explained to him that we’re trying to do that in terms that is approached from international law, that we’d look at it multilaterally because there are many claimants, and thirdly, that we’d adhere to the DOC and work towards the COC (Code of Conduct),” he said.

Del Rosario, who represented Mr. Aquino during the bilateral meeting with the UN chief, admitted that even during the “vetting forum” in Manila, there was “no consensus” on the ZoPFFC.

“We did not achieve a consensus because starting with the vetting forum, we did not have representatives from the 10 countries. So right then and there was no consensus,” he said, referring to the Asean Maritime Legal Experts’ Meeting last September.

“But the results of the legal vetting of the framework showed that the ZoPFFC was not inconsistent with the Unclos and it was relevant to the DOC,” he said, quoting the maritime legal experts’ opinion.

“We’re hoping that the full elements of ZoPFFC will be considered for the drafting of the COC. The other avenue is that we’re seeking relief from dispute settlements forum, which is Unclos,” he added, referring to a parallel track of pursuing third-party adjudication, arbitration or conciliation in the context of the dispute settlement mechanism of Unclos.

The Philippines has maintained that the ZoPFFC was an actionable framework to define and segregate the disputed land features from the nondisputed waters of the West Philippine Sea, and in the process, address the issue of China’s 9-dash line.

(The 9-dash line refers to the demarcation line used by the Chinese government for its claim in the South China Sea, which appeared in a map that it submitted to the United Nations. The other claimant-countries have protested China’s 9-dash line map, as did Indonesia, even though it does not have a claim on the Spratlys.)

The Philippines said that the ZoPFFC was consistent with the rules-based framework of managing the disputes in the West Philippine Sea and the DOC, the 2002 Declaration of the Code of Conduct of Parties in the South China Sea, a nonbinding agreement between China and Asean.

At the Asean-UN meeting earlier Saturday, Asean and the United Nations stressed the need for an “enhanced cooperation” in many areas, including counterterrorism, especially in these times of uncertainty, according to Communications Secretary Ricky Carandang.