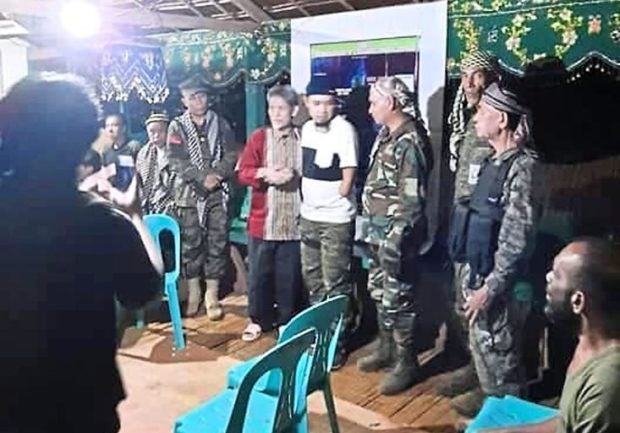 A picture of MNLF leader Nur Misuari accepting the surrender of notorious Abu Sayyaf commander Indang Susukan at the MNLF base in Jolo Island sometime in April this year.

KOTA KINABALU — Regional security officials are concerned over the free movement of a notorious Abu Sayyaf sub-commander, Idang Susukan, in Davao City in the Philippines.

Idang, who is wanted by the Philippines and Malaysia for cross-border kidnappings in the east coast of Sabah and other criminal activities in Jolo Island in the southern Philippines, was spotted with Moro National Liberation Front (MNLF) chairman Nur Misuari.

Regional intelligence sources said Idang was allowed to move freely after he surrendered to Misuari in Jolo Island in April this year.

It is understood that Abu Sayyaf gunmen surrendering to Misuari do not constitute amnesty.

The gunmen, however, remained under MNLF protection within its base camp in Jolo Island.

Idang had been involved in a spate of cross-border abductions in Sabah’s east coast since 2013, among which were:

> Chinese national Gao Huayun and Filipina Marcy Darawan who were abducted at Singamata Reef Resort in Semporna waters on April 2,2014.

> Chinese national Yang Zai Lin who was kidnapped from Wonderful Terrace Fish in Lahad Datu on May 6,2014.

> Malaysian Chan Sai Chun who was snatched from his fish farm in Kampung Sapang in Kunak on June 16,2014.

> Sarawakian tourist Bernard Then and Sabahan restaurant owner Thien Nyuk Fan who were seized from Ocean King Seafood Restaurant in Sandakan on May 14,2015.

Idang was involved in many direct and indirect negotiations for the release of hostages kidnapped from Sabah waters over the years.

Idang and Misuari arrived in Davao City – hometown of President Rodrigo Duterte – on Tuesday, heightening concern among security officials on both sides of the Philippines/Malaysia border.

According to regional intelligence sources, Misuari brought Idang to Davao to have him fitted with a prosthetic replacement for his left arm, which he lost during a gun battle with the Philippine armed forces in Jolo Island early last year.

The sources also said Misuari is expected to meet with Duterte in the next few days.

Misuari, whose MNLF base is in Jolo Island, is in Davao days after armed clashes between his faction and the rival MNLF group of Yusof Jikiri, who heads the MNLF council of 15. Misuari has pledged to Duterte to bring peace to the southern Muslim Mindanao region and crush the Abu Sayyaf and other Islamic State-related groups in the southern Philippines.

Misuari and Jikiri are part of the MNLF peace coordinating committee set up by Duterte.

But intelligence sources said the rivalry between the one-time comrades fighting for an independent Muslim Mindanao state in the 1970s and 80s is growing.

Jikiri, who is working closely with the Philippine security forces, has formed the MNLF-Anti-Kidnapping and Terrorism Task Force (MNLF-AKTTF) to act against the Abu Sayyaf. However, tensions have been growing between the Misuari and Jikiri groups.

Misuari has facilitated the surrender of notorious Abu Sayyaf members.

In contrast, Jikiri’s MNLF-AKTFF has joined forces with the Philippine military and police to hunt down Abu Sayyaf top leaders, including Radullan Sahiron @ one-armed commander and Hajan Sawadjaan.

According to intelligence sources, Misuari’s group was allowing Abu Sayyaf gunmen to seek shelter or protection in the MNLF camp in Jolo under the guise of surrender.

Misuari faces charges of rebellion and corruption but was given “temporary liberty” in October 2016 to allow him to participate in peace talks with the Duterte government.

In November 2001, Malaysian police arrested Misuari, who was wanted by the Philippines for an uprising in Jolo Island, in Sandakan. They sent him back to the Philippines.