PAL to use bigger jets for underground river tourism 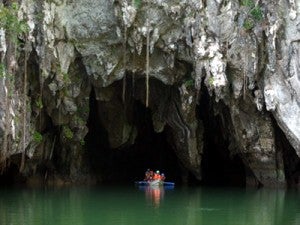 MANILA, Philippines—Philippine Airlines has vowed to promote the Puerto Princesa Underground River—now on the provisional list of winners of the recently concluded online global search for the new Seven Wonders of Nature—by using bigger jets to bring in more tourists.

This is apart from PAL’s promotional activities in the Philippines and abroad, said airline president and chief operating officer Jaime Bautista.

“In support of  Puerto Princesa Mayor Edward Hagedorn’s program to attract more tourists, we will fly our bigger planes to Puerto Princesa,” said Bautista in a statement, adding that PAL was teaming up with the city government to maximize the tourism potential of the underground river.

He said PAL would deploy wide body jets like the Airbus A330 to Palawan to accommodate the expected influx of tourists to the city after its underground river won global recognition.

At present, PAL flies twice daily to Puerto Princesa using an Airbus A320.

Hagedorn said the interest of tourists, both foreign and local, in the underground river has been greatly aroused by its new-found international fame.

“This is how important PAL regards this wonderful destination,” he said.

According to Bautista, the recent’ renovation and expansion of the Puerto Princesa airport was timely as it could now accommodate bigger aircraft.

Aside from the Puerto Princesa airport, other provincial airports that can accommodate bigger aircraft are those of Cebu, Davao and Iloilo.

Hagedorn redited PAL with helping develop and boost Palawan’s tourism industry. He said that back when Palawan was considered a missionary route, PAL was already flying to the island.

He noted that there used to be only two to three flights a day to Puerto Princesa. Now there are 11 flights a day, unloading not only local residents but mostly foreign tourists.

Last year, around 425,000 tourists visited the underground river. The city government expects some 550,000 visitors this year.

Already a Unesco World Heritage Site, the underground river is located in Barangay Sabang, 81 kilometers north of the city.