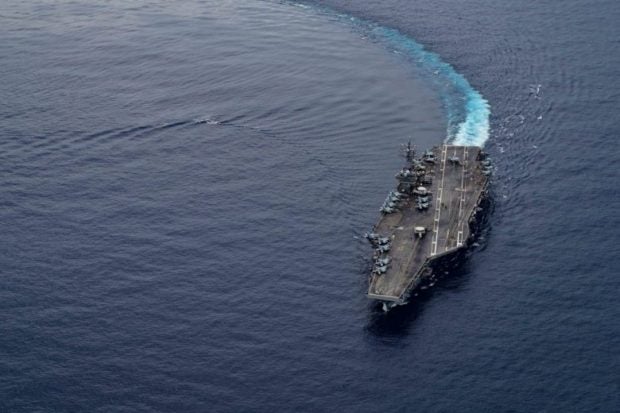 The Trump administration escalated its response against China by rejecting nearly all of Beijing’s significant maritime claims in the South China Sea. EPA-EFE via The Straits Times/Asia News Network

MANILA, Philippines — The Philippines, Malaysia, Vietnam and Indonesia are seen staying the course despite the United States’ “full-throated” backing of an international ruling dismissing China’s claims to nearly all of the South China Sea.

“The great powers, as they escalate their rivalry, will woo us into their side. But we will advance our own national interest,” President Rodrigo Duterte’s spokesman, Mr Harry Roque told reporters on Tuesday (July 14).

He said while the Philippines stands by the 2016 ruling against China, “this is not the sum total of our relations”.

“We will just have to agree to disagree. We will proceed with our bilateral relations (with China),” he said.

He said the Philippines does not want to rock the boat and would rather seek an end to disputes with China through venues like Asean and mechanisms like a “code of conduct” on resolving maritime rows.

The Philippines is contesting China’s claims over waters it considers part of its exclusive economic zone.

Mr Wang noted that with the joint efforts of China and Asean countries, the situation in the South China Sea has generally remained stable.
But, he said, the US “out of its own geopolitical needs, worries only if the South China Sea is not chaotic”.

“The US statement is a formal expression of what Washington has already been practicing for years,” he said.

Hanoi-based analyst Ha Hoang Hop said Vietnam also does not expect the US’ pivot to make any difference on the ground.

“China has exercised strong control in the South China Sea… The US will continue to exercise limited Fonops (freedom of navigation operations) and possibly take other actions. Even though the risk of military conflict is higher, I expect China and the US to hedge these risks,” he said.

“The worst will happen if one excessively follows the path of ‘might makes right’,” he added.

Indonesia, which is not a claimant state but has clashed with China over fishing rights around the northern islands of Natuna, said its position remains “firm and consistent”.

“Any country’s support for Indonesia’s rights concerning Natuna’s waters is normal, as our position is based on Unclos (UN Convention on the Law of the Seas),” said Dr Teuku Faizasyah, spokesman for Indonesia’s Foreign Affairs Ministry.

Unclos delineates exclusive economic zones that countries may claim, based on land features.

Dr Beginda Pakpahan, a political and economic analyst on global affairs at University of Indonesia, said it would be more prudent for the US and China to “refrain from taking actions that could escalate tensions” in the region.

The two superpowers should just allow territorial disputes to be resolved through existing mechanisms like Unclos, he said.

The Trump administration has escalated its response against China by rejecting nearly all of Beijing’s claims in the South China Sea.

US Secretary of State Mike Pompeo said on Monday the US would treat Beijing’s pursuit of resources in the dispute-rife South China Sea as illegal, ramping up pressure on another front.

In line with the 2016 ruling, Mr Pompeo said Mischief Reef and Second Thomas Shoal both “fall fully under the Philippines’ sovereign rights and jurisdiction”.

The Philippines brought the case against China in The Hague in 2013, arguing that Beijing’s so-called nine-dash line that marks its claims to nearly all of the South China Sea runs counter to Unclos.

The tribunal in The Hague sided with the Philippines in 2016, and dismissed China’s claims.

But China refused to recognize that ruling, and instead transformed reefs, shoals and atolls it occupied in the South China Sea into island fortresses.

Mr Pompeo is now offering a “full-throated endorsement of the tribunal’s ruling”, Mr M. Taylor Fravel, a political scientist at the Massachusetts Institute of Technology, told The New York Times.

The US now rejects Beijing’s claims in the waters surrounding Vanguard Bank off Vietnam, Lucania Shoals off Malaysia, waters considered in Brunei’s exclusive economic zone and Natuna Besar off Indonesia.

“Any (Chinese) action to harass other states’ fishing or hydrocarbon development in these waters – or to carry out such activities unilaterally – is unlawful,” Mr Pompeo said.

But some analysts say Washington’s latest involvement in the South China Sea may just be short-term bluster and not a permanent policy goal.

“I think it’s good this happened, but it’s a one-off. For it to really have an impact, we’ll have to see what happens down the road,” said Mr Murray Hiebert, head of research at BowerGroupAsia, on Tuesday.

He was speaking at a video conference organized by think-tank Stratbase in Manila.

But he added that China was likely to see American pronouncements as coming from a “weakened Trump administration, struggling and looking for foreign enemies to attack”.

“One problem with the current (Trump) administration is they make a very strong statement and then disappear for months at a time,” he said.

Mr Hiebert said Mr Pompeo’s statements would have had “more gravitas” had Washington been consulting Asean.

Mr Rupert Hammond-Chambers, managing director at BowerGroupAsia, said at the same video conference that the more assertive posture could be related to trade negotiations between Washington and Beijing.

“Part of the reason surrounding the timing of the decision out of the State Department was a calculation on the part of the Trump administration that the phase one trade deal the US consummated with the Chinese was not going anywhere,” he said.

“So, we should expect more of these sorts of statements that push back on some of China’s behaviors,” he added.

“Both (Republicans and Democrats) employ cynical election ploys. This is not one of them,” he said.

“The reality is, there’s no points to be gained. Most Americans don’t know or care about the South China Sea,” he said.

He said the Trump administration seems to genuinely believe in a “whole-of-government effort to begin to better balance China”.