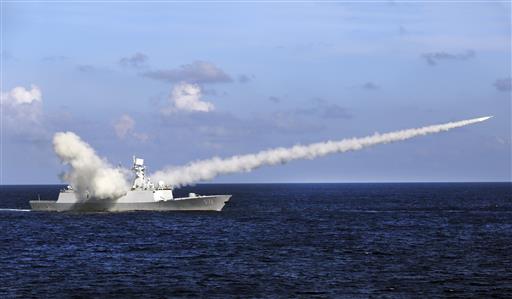 In this July 8, 2016 photo released by Xinhua News Agency, Chinese missile frigate Yuncheng launches an anti-ship missile during a military exercise in the waters near south China’s Hainan Island and Paracel Islands. They are controlled by Beijing but also claimed by Vietnam and Taiwan. – Philippine Foreign Affairs Secretary Teodoro Locsin Jr. on Friday, July 3, 2020, warns China that it would be met with “severest response” should its military exercises in the South China Sea “spill over” to the Philippine territory. The Chinese People’s Liberation Army is said to hold drills in the South China Sea, particularly in waters off Paracel Islands, from July 1 to 5. (Zha Chunming/Xinhua via AP FILE PHOTO)

MANILA, Philippines — Foreign Affairs Secretary Teodoro Locsin Jr. on Friday warned China that it would be met with “severest response” should its military exercises in the South China Sea “spill over” to the Philippine territory.

In a taped video statement, Locsin said the Philippine government views “with interest and some concern” reports on Navigation Notice No. 00-69 regarding the conduct of military exercises by the Chinese People’s Liberation Army in the South China Sea, particularly in waters off Paracel Islands from July 1 to 5.

The notice, Locsin said, states that “no vessel shall be allowed to navigate within the prescribed area and all vessels shall have to follow the guidance of the commanding Chinese ship on the site.”

“My first reaction was to check the coordinates in the Navigation Notice…The Chinese naval military exercises, if they stick to their coordinates, do not impinge on Philippine territory,” Manila’s top diplomat said.

“These exercises are taking place in waters off Xisha Islands —the Paracels — over which Vietnam claims sovereignty. Should the exercises spill over to Philippine territory then China is forewarned that it will be met with the severest response, diplomatic and whatever else is appropriate,” he added.

Manila and Beijing have long been locked in a maritime dispute. In 2013, the Philippines filed a case with the Permanent Court of Arbitration (PCA) at The Hague in The Netherlands challenging China’s sweeping claim of nearly the entire South China Sea.

The Hague-based court then ruled in favor of the Philippines in July 2016 invalidating China’s nine-dash line claim.

President Rodrigo Duterte has been criticized for setting aside the landmark 2016 arbitral ruling against Beijing’s mythical nine-dash line claim in the South China Sea.

China refused to recognize the ruling, continuing its aggression in the disputed waters and building artificial islands to house military facilities.

“We have previously protested the establishment of districts Xisha and Nansha under the administrative jurisdiction of Sansha City, noting that the creation of Sansha City is null and void ab initio for being devoid of basis in international law,” Locsin continued.

“This is the problem with playing fast and loose with historical narratives and historical names; they open themselves to error; unless the real purpose is to excuse unchallenged mistakes that may over time harden into rights,” he added.

However, the foreign affairs chief still recognized China as the Philippines’ “nearest and biggest trading partner.”

“China’s presence and participation is essential to the success of any post-COVID recovery of our national, regional, and the global economy,” he added.

Still, Locsin called on “erring” parties to “refrain from escalating tension” and abide by responsibilities under international law, particularly the United Nations Convention on the Law of the Sea.

“We urge them to adhere to the rule of law and their commitments to international instruments such as the 2002 Declaration of the Conduct of the Parties in the South China Sea, particularly the exercise of self-restraint in the conduct of activities that would complicate or escalate disputes and affect peace and stability especially in this pandemic,” he said.

He further said that the Philippine government has “consistently” protested violations of international legal obligations and commitment and “strongly condemned the conduct of such activities in areas of the South China Sea within the Philippines’ sovereignty, sovereign rights, and jurisdiction — including waters off the Kalayaan Island Group and the Scarborough Shoal.”

New Zealand locks down all nursing homes after virus return