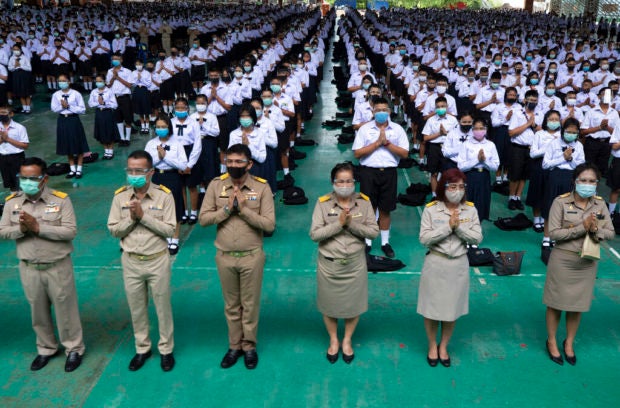 Teachers and students wearing protective gear to help curb the spread of the coronavirus as they pray before class at Samkhok School in Pathum Thani, outside Bangkok, Wednesday. (AP)

BANGKOK — Thailand has begun a fifth phase of relaxations of COVID-19 restrictions, allowing the reopening of schools and high-risk entertainment venues such as pubs and massage parlors that had been shut since mid-March.

It also is allowing in foreign visitors on a controlled basis, limiting entry to those with existing family or work ties to the country, students, technical experts for businesses, investors and specially invited VIPs. Scheduled passenger flights to Thailand were suspended in early April.

The number of foreign visitors allowed into the country each day is limited to 200, and they are supposed to travel on repatriation flights bringing Thai citizens home. All returnees, foreign and Thai, will be subject to varying degrees of quarantine.

All confirmed coronavirus cases for the past five weeks have been repatriated Thais rather than cases of local transmission, giving the government confidence to lift restrictions. However, it has extended through July a state of emergency, though critics charge it is used to suppress political dissent.

The spokesman for the government body coordinating Thailand’s response to the virus expressed pride Wednesday that the European Union has selected the country as one of just 14 whose travelers will be allowed to enter.

The EU decision has little immediate practical effect since Thailand is maintaining a ban on regularly scheduled international flights with no set ending date.

In other developments in the Asia-Pacific region:

— Tokyo Disneyland and DisneySea reopened Wednesday after being closed for four months due to the coronavirus pandemic, with hundreds of visitors applauding as the gate opened. The two parks near Tokyo have new guidelines, including limiting the number of entrants in three shifts to maintain social distancing. No handshakes, hugging or photos taken with Mickey Mouse and other characters are allowed. Though characters greet guests from afar, their signature parades and shows have been suspended to avoid crowds. Entrants are asked to get their temperatures checked at the gate, sanitize their hands and wear masks while in the park.

— The Philippines has retained a strict lockdown in a central city President Rodrigo Duterte described as a new coronavirus hot spot, while the capital and the rest of the country were placed in lighter quarantines. The moves further stretch three-month lockdowns and quarantines in the country that has counted more than 37,500 people infected, including 1,266 who have died. Duterte blamed Cebu city, which will remain under a lockdown up to July 15, for many violations of the rules that led to infection spikes. “Cebu is now the hot spot for COVID. Why? Many of you did not follow. So don’t get mad at me,” he said.

— Authorities in Indonesia’s capital are extending for 14 days restrictions put in place to fight the spread of the coronavirus because cases are still on the rise. Jakarta has confirmed over 11,600 cases of the virus, including 632 deaths. In all, Indonesia has reported 57,770 cases, including 2,934 fatalities. Large-scale social restrictions were imposed in the capital on April 10 and were eased on June 10. Jakarta Gov. Anies Baswedan said Wednesday that there have been two main areas that have recently become the center of transmission in Jakarta — markets and trains. He said 19 markets have been closed because of this.

— India reported 18,653 new coronavirus cases and 507 deaths in the past 24 hours with June proving to be the worst month since the pandemic hit the country in late January. India’s total cases reached 585,493 on Wednesday, more than 400,000 of them reported in June alone. India’s health ministry said 17,400 people have died. Prime Minister Narendra Modi has expressed concern over negligence in maintaining social distance and wearing masks.

— South Korea is considering listing religious facilities with nightclubs, hostess bars and karaoke rooms as “high risk” venues for the spread of COVID-19 following a slew of transmissions tied to church gatherings. Prime Minister Chung Sye-kyun said Wednesday more than 40% of the country’s newly confirmed infections over the previous three days were traced to places of worship. He pleaded people to refrain from religious gatherings and criticized churches and other facilities for failing to use proper prevention measures. High-risk facilities are advised to close or otherwise must enforce anti-virus measures and register visitors with smartphone QR codes so virus carriers can be tracked.

— China reported just three new cases Wednesday, all in the capital Beijing where an outbreak last month appears to have run its course amid intense testing and case tracing. No new deaths were reported, leaving the toll at 4,634 among 83,534 cases of COVID-19 recorded since the virus was first detected in the central Chinese city of Wuhan late last year. With 328 cases reported since June 11, Beijing has reinstated some prevention measures, suspended classes for schoolchildren and carried out 8.3 million virus tests among the city’s more than 20 million residents.