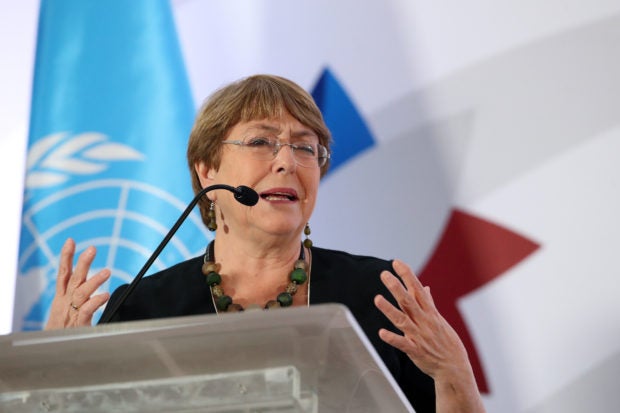 In this file photo, United Nations High Commissioner for Human Rights Michelle Bachelet speaks during the inauguration of the “Seminar of Afro-descendant Women of Latin America” in San Jose, Costa Rica, on Dec. 03, 2019. (Photo by JOHN DURAN / AFP)

During the 44th general session of the UNHRC in Geneva, Switzerland on Tuesday, Bachelet presented to the council her the report of her office on the human rights situation in the Philippines.

Among the findings of the report included alleged harassment of human rights defenders, journalists, lawyers and trade unionists.

“In the case against Maria Ressa, Rappler and ABS-CBN, we are following both cases closely and with concern, given the deep unease among journalists about freedom of expression in the Philippines. In the case of Maria Ressa, this is a case that gives rise to many concerns,” Bachelet said.

“The use of the cybercrime law. The 12 years prescription period for illegal offense and fears that the case against her and Rappler are politically-motivated in retaliation for the critical coverage of the President and government action. I must stress that under human rights standards imprisonment is never an appropriate penalty for defamation. States should consider decriminalizing defamation,” she added.

Last June 15, a Manila court convicted Ressa and former Rappler researcher Reynaldo Santos Jr. of cyberlibel in a case filed by businessman Wilfredo Keng over an article published in 2012.

In an earlier statement, Malacañang said the court’s decision to convict Ressa and Santos should be respected as it insisted that President Rodrigo Duterte was a “supporter” of press freedom and was not behind any effort to curtail press freedom in the country.

Among the member-states that expressed concern over the conviction of Ressa and Santos are Finland, Canada, the United Kingdom, Ireland and Iceland.

While these countries acknowledged the Philippines’ improvement in giving universal access to health care and the protection of economic and social rights, they still raised concerns over the findings of the said report.

“Canada supports the report’s call for prompt impartial, thorough, and transparent investigation into all cases of death and alleged violations of human rights. We are also deeply troubled by the increasing criticism and intimidation of the press and the deliberate targeting of human rights defenders and journalists,” Canada’s representative told the council.

“In a democracy, human rights defenders and journalists must be able to do their work freely and without the fear of reprisal,” Canada added.

Finland’s representative, who spoke on behalf of the Nordic countries, said the guilty verdict of Ressa and Santos was “particularly worrying.”

“We share the High Commissioner’s concern outlined in the report on the killings committed in the context of the so-called war on drugs as well as that of human rights defenders, journalists, ongoing threats to freedom of expression and media freedom with legal charges and prosecutions being brought against journalists and senior politicians critical of the government as well as actions to shut down media outlets,” Finland said.

The United Kingdom, likewise, stressed that journalists should be able to do their job “without fear of reprisal.”

“The UK remains strongly committed to supporting human rights defenders, land-rights activists and journalists including in the Philippines. They should be able to operate without fear of reprisal. The UK welcomes the steps taken by the government of the Philippines to address the impunity of the killings of journalists in the Ampatuan massacre case,” the UK’s representative said.

“The UK’s concerned about the continuing cases against Rappler and its CEO Maria Ressa and noted the recent closure of ABS-CBN,” UK added.

Ireland further underscored that freedom of expression and opinion, whether online and offline, “are essential cornerstones of democracy.”

“We urge the government to take swift action to ensure that the media and civil society, including human rights defenders, can freely carry out their work without interference,” Ireland’s representative said.